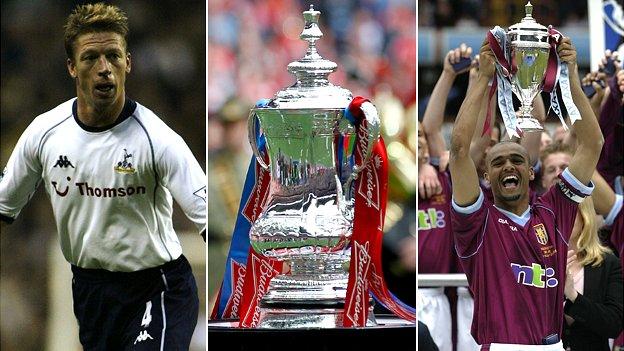 A World Cup winner, the oldest club in world football and a team named after a country are just three of the 540 sides to have exited the FA Cup since qualifying got under way in August.

With 196 teams left in the competition, non-league clubs up and down the country will look to continue their journey on the road to Wembley in the third qualifying round - and they are just two wins away from a potential televised first-round match against a Football League club.

From a taxi driver who once outshone Wayne Rooney to a double hat-trick scoring 37-year-old and the son of a Champions League winner, BBC Sport takes a look at some of those aiming to keep their hopes of FA Cup glory alive.

The Leamington striker who outshone Rooney

As Wayne Rooney prepares for England's Euro 2016 qualifier against Estonia on Sunday, Stefan Moore, a player once regarded as highly as the Manchester United striker, will be in FA Cup third qualifying round action for Conference North side Leamington, who host local rivals Worcester City.

Moore, 31, played in the Premier League for Aston Villa and also turned out for Queens Park Rangers and Leicester City, but dropped into non-league football five years ago.

Also the owner of a taxi firm, it is perhaps not the life Moore envisaged when he upstaged Rooney in the 2002 FA Youth Cup final between Villa and Everton.

"You get a lot of negative articles about him being a taxi driver, but they always fail to mention that he owns the company," says Leamington boss Paul Holleran.

If ever there was proof that age is just a number, then Iyseden Christie's exploits in the FA Cup recently is it.

The former Mansfield Town and Leyton Orient striker, who turns 38 next month, hit a double hat-trick for Halesowen Town - who play in the eighth tier of English football - in a 7-1 win against Ellistown & Ibstock United to secure his team's place in this weekend's third qualifying round.

"Everything that came my way ended up going in," Christie says.

"I scored with my head, left foot and right foot, so it was the perfect hat-trick, except it happened twice!"

Christie's goal-scoring feat is reminiscent of George Best grabbing six in a FA Cup fifth-round win for Manchester United against Northampton 44 years ago.

"Iyseden had scored three by half-time and when he went into the dressing room he looked at me and said 'don't take me off boss'," says Halesowen Town manager John Hill.

"At that stage I reckon he was thinking about a double hat-trick.

"It is good because it is special for him, and it has brought some great publicity to the club.

"Every now and then people just need a reminder of how great the competition is and Iyseden scoring six goals at 37 does that."

Not too many FA Cup games at this stage of the competition would have a European Championship winner watching in the crowd, but that was the case for one second qualifying round fixture.

Former Tottenham midfielder Steffen Freund, who was part of Germany's Euro '96-winning team and also won the Champions League while at Borussia Dortmund, was among the modest crowd who watched Chelmsford City beat Worthing 6-0 last month.

He was there to watch his son Niklas make his FA Cup debut in the Chelmsford goal.

"Making my FA Cup debut was nerve wracking," says Niklas. "My dad came to watch, so did all my family and my girlfriend. I wanted to do well for myself and the team of course, but also for them.

"Playing in the FA Cup is a dream. It's amazing to see what it means to fans in this country even at these early stages."

Steffen Freund was renowned for being a tough-tackling no-nonsense midfielder during his playing days, and Niklas believes elements of his father's characteristics have been passed on to him.

Niklas Freund side will look to keep their FA Cup run going when they travel to Brighton-based Whitehawk this weekend.

The minnows amongst the minnows

Willand may just be a tiny village in Devon that consists of little more than a post office and a pub, but their football team's FA Cup run has captured the locals' imagination.

Willand Rovers, who play in the ninth tier of English football, are the lowest-ranked team left in the competition and will this weekend play an FA Cup game in October for the first time in their history, having never progressed beyond the second round of qualifying before.

They have progressed through five rounds to earn a tie against Essex-based Aveley and are just two wins away from reaching the first-round proper.

"With the amount of games we have played already it is like a League Two side reaching the semi-final, so the game against Aveley is a semi-final tie for us," says Willand player-manager Scott Rogers.

"Even to reach the next round would be amazing because there are clubs like Bristol Rovers and Torquay coming into it. Their average attendance is probably larger than the population of Willand.

"But that is the goal, to get through and get a game against a team like that. If we did, I've told the lads that even if we are losing 5-0, if we score they should celebrate like crazy, because how often do clubs like ours score in front of 4-5,000 people?"

While Willand's FA Cup run is the best in their history, the game will also represent a significant landmark moment for Aveley. 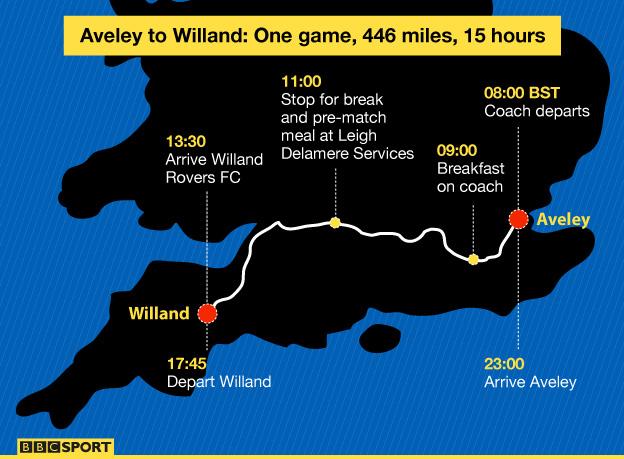 The 446-mile round trip from the village in Essex to Willand represents their longest-ever away trip.

For club secretary Craig Johnson, it is a journey worth making.

"This is a massive game for us," he says.

"It is only the second time in 30 years we have reached the third qualifying round. "We have never played a Football League club and now we are just two rounds away from doing that.

"Every season there is a club similar to ours that reached the promised land of FA Cup first round, hopefully it can be us."

The magic of the FA Cup was very much alive in Essex as Concord Rangers defender Jack Lampe helped his side into the third qualifying round - with a string of saves Gordon Banks would have been proud of.

Lampe, a former West Ham trainee, was sitting on the substitutes' bench as his side, nicknamed The Beachboys, hosted Wealdstone in a second-qualifying round replay when goalkeeper Jamie Butler had to be taken off with an injury.

With no recognised keeper on the bench, Lampe was asked to deputise and he helped his side progress, notably producing a double save as Concord Rangers sealed a 2-0 win.

"Everyone wants to perform well in the FA Cup and I pulled off a couple of saves that I reckon were just like Banks," he says.

"A lot of it is natural instinct, just doing what a normal goalkeeper would. Obviously there is a bit more to it than that and I hope our goalkeeper will be back before the next game."

Lampe's hidden talent had first come to the fore when he produced a couple of saves during a training session. Then, in a league game, ironically against Wealdstone, first-choice keeper Butler got injured, and Lampe offered to step in.

He adds: "A few of the lads mentioned the saves I had made in training and said I should go in goal. I thought 'why not?'.

"I did a good job then as well to be fair. We play Wealdstone again later in this season, but I probably won't look to go in goal. I don't want to rub it in, I've already got a clean sheet off them."

The fall and fall of Stockport County is a sad tale to read for any football fan, with the former Championship side having dropped through the divisions in recent years to find themselves currently in the Conference North - their lowest position since 1905.

More used to being the giant than the giant killer, Stockport entered the FA Cup at the second qualifying round stage last month, going into the hat alongside the likes of FC Romania, who were playing Sunday League football in 2006, when the Hatters were nine divisions higher in League Two.

Stockport beat Harrogate Town to reach the third qualifying round, where they will host Ilkeston.

Looking to repeat past heroics will be Blyth Spartans.

Northern Premier League side Spartans once famously reached the last 16 of the FA Cup in 1978 - the best run by a non-league side in the post-war period.

They travel to Mickleover Sports in Derbyshire on Saturday.