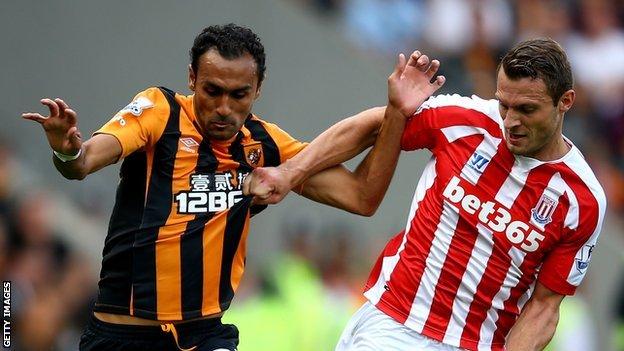 The 27-year-old was injured during the English Premier League side's 2-0 win over Crystal Palace on Saturday.

Hull said the right winger/full-back is suffering from "a back spasm".

Egypt face Botswana away on Friday and then at home five days later with pressure mounting on coach Shawky Gharib after two defeats in Group G.

The Pharaohs are pointless - as are Botswana - and are facing a tough task to qualify for next year's tournament in Morocco.

On Tuesday, Egyptian Football Association president Gamal Allam said: "The national team's failures are the responsibility of its technical staff. We will hire a foreign manager if Gharib fails to take the team to the Nations Cup."

It seems that the message had already been communicated to Gharib, who was in defensive mood at a news conference just before he left for Botswana.

"I always welcome you and your questions and comments, but I hope your criticism for us will be a constructive criticism," he told the assembled media.

"Criticise as you wish. You're welcome to tell me your ideas and comments about players. Criticism sometimes can go over the top and beyond the limit. It is sometimes useless when it is not made to help the team and the way it plays football."

The former Egypt international has put his faith in local players, with only five foreign-based stars in his squad.

Gharib has recalled Al Ahly defenders Saad Samir and Mohamed Naguib to bolster a defence that faltered in the defeats by Senegal and Tunisia in their opening qualifiers.

But goalkeeper Essam El-Hadary, who plays for Ismaily, and his club-mate Hosni Abd-Rabou are both out.