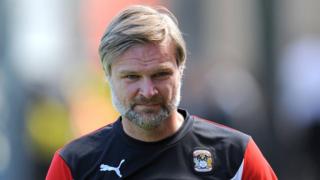 Coventry City made it through to the southern area quarter-finals of the Johnstone's Paint Trophy with a 3-1 win over Exeter City at the Ricoh Arena.

"We've got a long-term strategy to develop our young players in the Coventry City way and I was delighted with the performance," he said.

"I was disappointed to lose Aaron Phillips against Crawley because he started brilliantly and then had to come off injured. But he's come in and applied himself again and produced two wonderful finishes. I think he's disappointed he didn't get his hat-trick but I also think he's really grabbed his opportunity with both hands."