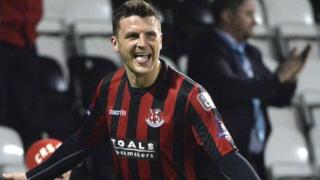 Crusaders edge Coleraine 3-2 in an exciting game at Seaview to make the quarter-finals of the League Cup.

Mark Miskimmin put the Bannsiders in front with a spectacular effort, but Richard Clarke replied for the hosts.

Diarmuid O'Carroll's strike put the Crues ahead, Neil McCafferty levelled with a fine free-kick, but O'Carroll scored from the rebound after his penalty was saved to secure victory.