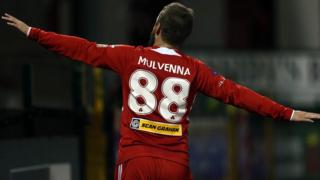 Cliftonville's hopes of winning the League Cup for a third season in a row remain on track as they beat Carrick Rangers 4-1 at Solitude.

Tiarnan Mulvenna headed the Premiership champions into the lead but Kyle Cherry equalised for the Championship One side.

Mulvenna scored again in the second half to make it 2-1 before stoppage-time goals by James Knowles and Martin Donnelly ensured Cliftonville's progress to the quarter-finals.