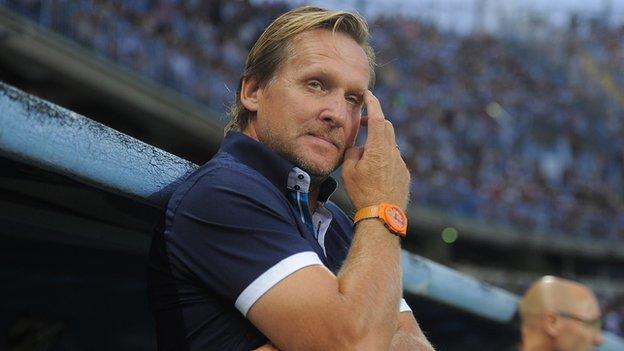 German Bernd Schuster has replaced Dutchman Patrick Kluivert on the Ghana FA's (GFA) five-man shortlist to be the new coach.

The GFA has said the former Dutch international has withdrawn from the race to replace Kwesi Appiah.

Kluivert had been due to attend an interview in Accra on 17 October.

Former Real Madrid coach Schuster, who had been on the standby list, will now undergo an interview at a date to be determined by both parties.

Schuster is one of the few players to have had stints at Real Madrid and their Spanish rivals Barcelona, winning league titles at both.

He also helped Germany win the European Championship in 1980, playing in the 2-1 win over Belgium in the final.

His most recent managerial post was at Spanish club Malaga, he lost his job in May after they failed to finish in the top half of the league.

Grant meanwhile has a wealth of management experience, including a four-year spell in charge of his home country Israel and a year as Chelsea coach.

Italian Tardelli is perhaps most famous for his ecstatic goal celebration in the 1982 World Cup final victory over West Germany. He has since coached, among others, Egypt and was also assistant coach of the Republic of Ireland.

Pont and Jimenez are lesser known names globally. Pont has been Switzerland assistant coach, while the most recent role for Jimenez was coach of Spanish side Valladolid.

The GFA added that Argentine Ricardo Gareca remains on standby and will be drafted in the event any of the chosen shortlist is not readily available.

Maxwell Konadu is in charge of the Black Stars in a caretaker capacity and oversaw a 1-1 draw with Guinea on Saturday in a 2015 Africa Cup of Nations qualifier.

The two side meet again on Wednesday in Tamale.