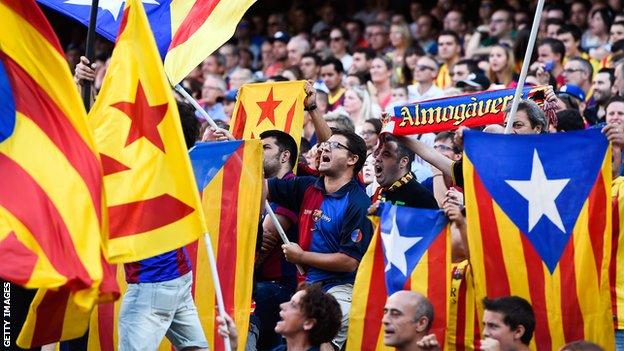 Which European club charges £298 for a match-day ticket? And which one has a season ticket that costs an eye-watering £3,600?

The BBC's Price of Football study reveals all.

We contacted 31 clubs in Belgium, Denmark, France, Germany, Italy, the Netherlands, Norway, Portugal, Spain and Sweden to discover how much it costs supporters there to follow their team.

Far from it. Sporting Lisbon's cheapest season ticket costs just £55 and is less than any other men's club covered in our study.

The cheapest season ticket in the top five divisions of English football is almost double that price.

Eastleigh, situated just a few miles north of Southampton on the south coast, charges £105 for a season ticket to watch Conference football.

Back in Portugal, fans of Sporting's rivals Benfica and Porto pay around £70 and £78 respectively for a season ticket.

It's a similar tale in both Germany and Spain.

In the Bundesliga, champions Bayern Munich charge around £110 for their cheapest season ticket, while it's £133 at Bayer Leverkusen.

That's less - and a lot less in some cases - than the prices charged by Premier League clubs.

On the other hand, Arsenal charge fans at least £1,014 for a season ticket at the Emirates, although that gives fans admission to seven additional games in various cup competitions.

Still, you can buy 10 season tickets at the Nou Camp for that amount.

The most expensive match-day prices at Inter Milan, Real Madrid, Paris St-Germain, Barcelona, Marseille, Atletico Madrid, Monaco and Juventus are all also over £100.

No club in England or Scotland has a match-day ticket more expensive than £100.

Season tickets can be cheap in Europe, and so can match-day tickets.

An adult ticket at Barcelona costs around £18. At Champions League winners Real Madrid, it's a little more at £18.80.

You can pay that much to watch a Conference game at Alfreton Town, Bristol Rovers and Lincoln City.

In the Bundesliga, tickets for Bayer Leverkusen, Bayern Munich, Borussia Dortmund and Schalke hover around the £12 mark. It's the same at Danish Superliga sides Aalborg and Copenhagen.

Several clubs we contacted offer a match-day ticket for less than £10. Among them are Marseille, Porto and Valencia.

But the cheapest match-day tickets can be found at Malmo and Lille.

Entry to Swedbank Stadion in Malmo can cost as little as £5.95, but it will be even less in Lille. A game at Stade Pierre Mauroy can cost just £5.87.

Manchester City and Manchester United sell the most expensive replica shirts in the Premier League.

But, at £55, the price they charge for an adult top is less than most of the 31 European clubs we contacted.

Roma are the dearest. The Serie A side charge just over £67.

Several clubs are not far behind. Norwegian side Stromsgodset, Paris St-Germain, Monaco, Lille, Athletic Bilbao, Barcelona, Real Madrid, Inter Milan and Belgium side Anderlecht are all around the £67 mark.

Borussia Dortmund are the cheapest of the four Bundesliga clubs we contacted, although the £59 they charge for an adult shirt is still more than either Manchester club.

Dutch side PSV Eindhoven and Sweden's Malmo both sell adult shirts for under £52 - that's less than Real Madrid and Valencia charge for a junior shirt.

Believe it or not, a junior shirt from Real Madrid and Valencia will set you back almost £59. Even Stromsgodset's junior shirt costs more than £57.