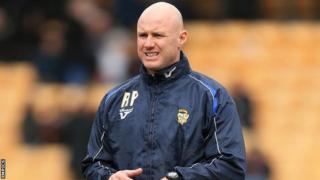 While the 29-year-old netted a second late on, it proved immaterial as two goals in six second-half minutes from Joe Garner and Paul Gallagher settled the outcome.

"The quality into Tom at times wasn't good enough and he had a tough battle in the first half," Page told BBC Stoke. "But we addressed it for him at half time.

"In the first half, we tried to over play in the wrong areas. Going behind was a test of character but, in the second half, we started well and slowly got into the game."