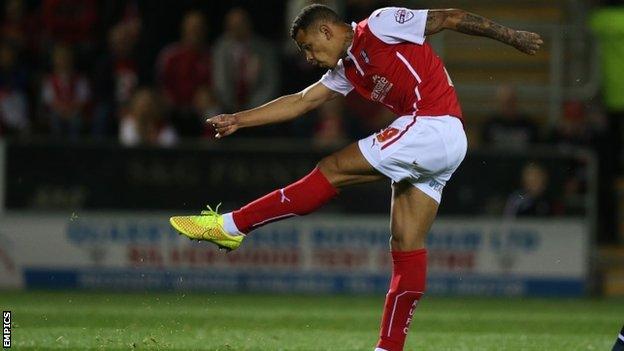 Jonson Clarke-Harris scored Rotherham's winner as they came from behind to beat Yorkshire rivals Leeds.

The substitute had been on the pitch for two minutes when he collected the ball in midfield, drove forward and hit a low swerving 30-yard shot.

Ten minutes earlier, Alex Revell had hooked in his first league goal of the season to cancel out Mirco Antenucci's neat first-half finish.

However, the Millers deserved victory for a spirited second-half performance which made up for their lacklustre showing in the first period.

It was only Rotherham's second league win over their more illustrious opponents since 1962, while new Leeds boss Darko Milanic continues to wait for his first victory four games into his tenure.

Leeds controlled the first half, dominating possession and opening the scoring when Antenucci finished confidently after being played in on goal by strike partner Souleymane Doukara.

The hosts rallied after the break, though, and Revell capitalised when Leeds goalkeeper Marco Silvestri could only punch clear Lee Frecklington's shot.

Victory was complete when club record signing Clarke-Harris made his dramatic entrance from the bench.

Revell wasted two late chances to put the finishing touches to the win, but the hosts held on for a memorable win over Leeds.

"We were disappointed to be behind at half-time. We made the change and second half we played more like we can play.

"It was a terrific night for the football club and a hard-earned win that we deserved."

"We were playing well and controlled the game. We scored the goal we had some good counter-attacks, but in the last few minutes of the first half they began with long balls and crosses from all areas.

"They made a lot of pressure and although we were prepared for it in the second half we made two mistakes and they scored.

"We had some problem in midfield from the pressure from them, but we made some good moves in the second half and their goalkeeper made some good saves."