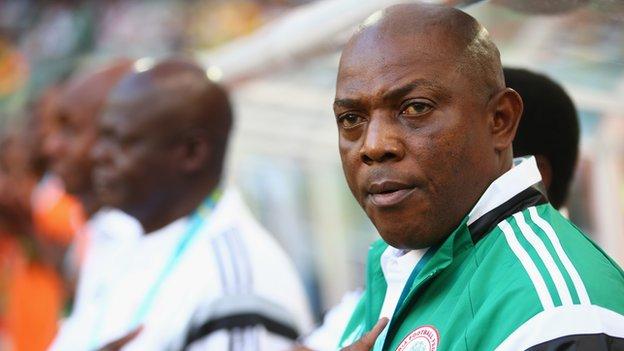 Defending African champions Nigeria fell to a shock 1-0 defeat away to Sudan to slump to the bottom of Group A in qualifying for the 2015 Africa Cup of Nations.

A goal from Bakri Almadina just before half-time gave Sudan a famous victory in Khartoum.

The Super Eagles desperately needed a win to kick-start their campaign, after suffering a shock home defeat by Congo Brazzaville and an away draw with South Africa in their opening group matches.

Coach Stephen Keshi, who is working without a contract, suffered a blow before a ball had even been kicked when Victor Moses was forced to withdraw because of a thigh injury.

Bafana Bafana struck a quick double early in the second half, Bongani Ndulula and Tokelo Rantie scoring a goal each in the space of two minutes, to clinch victory.

In Group B Algeria beat Malawi 2-0 in to be on the verge of booking their place at the finals in Morocco. The Desert Foxes have a 100% winning record in the group after three matches and victory at home to Malawi in Wednesday's return fixture will clinch their qualification.

Algeria, who are the top-ranked side in Africa, took the lead in Blantyre after only nine minutes when Rafik Halliche (pictured at top) headed in from a corner.

Twenty minutes later, Feghouli Sofiane thought he had doubled the advantage but his effort was ruled out for offside.

After the interval, Malawi came close to an equaliser when midfielder Joseph Kamwenda hit the woodwork and then Chiukepo Msowoya shot wide from inside the six yard box.

And the Flames were made to pay for their misses when Algeria substitute Mesbah Djamel Eddine fired home in added time to seal the victory.

In the group's other match, Mali won 2-0 away to bottom side Ethiopia.

Goals in each half from Abdoulaye Diaby and Sambou Yatabare secured the win to put the Eagles on six points, second in the table.

Ethiopia have yet to get off the mark and qualification now looks very unlikely for Mariano Barreto's team.

There was also an upset in Group F, where Cape Verde fell 2-0 away to Mozambique.

Cape Verde went into the game top of the table after two victories, while the visitors had managed only two draws.

But a strike just before half-time by Kito and another 11 minutes after the break from Reginaldo gave the hosts victory and closed the gap to their opponents to only one point.

In the group's other match, 2012 champions champions Zambia played out a 0-0 draw with Niger in Niamey.

Earlier this week Zambia appointed Nico Labohm as assistant coach to Honour Janza but the addition to the coaching staff could not inspire Zambia to victory.

Both sides are on two points but remain in touch in a tight group.

Sierra Leone shook off a multitude of off-field problems to stop Cameroon's rival and grind out a draw against the Group D leaders.

Because of the outbreak of Ebola in Sierra Leone, the Leone Stars are unable to play their home games in their own country and the match was held in Yaounde - as will Wednesday's return fixture.

Added to that disadvantage aside was the row between the country's sports ministry and FA that led to Atto Mensah stepping aside as coach on the eve of the game for John Sesay to take over.

Yet, remarkably, the Leone Stars held Cameroon to a 0-0 scoreline that gave them their first point of the final group stage of qualifying.

But the Indomitable Lions, who had won their two previous qualifiers to bounce back from a disastrous World Cup, remain top of the table with seven points.

In Group D's other match, Ivory Coast claimed a 2-1 win away to DR Congo to leapfrog their opponents in the table.

Swansea striker Wilfried Bony opened the scoring after 25 minutes and they held the lead until 65 minutes when Cedric Mongongu restored parity from the penalty spot.

Max Gradel struck the winner with only six minutes remaining to give the Elephants a much-needed boost after they lost 4-1 to Cameroon last time out.

Guinea, who were also forced to move their home game because of the Ebola outbreak, fought back to draw 1-1 with Ghana in Morocco in the late Group E kick off on Saturday.

Ghana, playing under caretaker management after firing coach Kwesi Appiah last month, took the lead through Asamoah Gyan in the first half. Ibrahima Traore ensured Guinea would at least get a draw with a goal nine minutes from time. The point puts Ghana top of the group.

Kokou Donou scored the only goal of the game on 30 minutes in Kampala to give his side their first points in the group and keep alive their hopes of qualification.

"We are happy to get three points away in Uganda and we shall now fight to get another three next week at home," said Togo striker Emmanuel Adebayor.

Burkina Faso, runners-up in the last tournament, lost 2-0 away to Gabon in a meeting between the top two sides in Group C. Goals from Pierre-Emerick Aubameyang and Malick Evouna helped Gabon move to the top of the group.