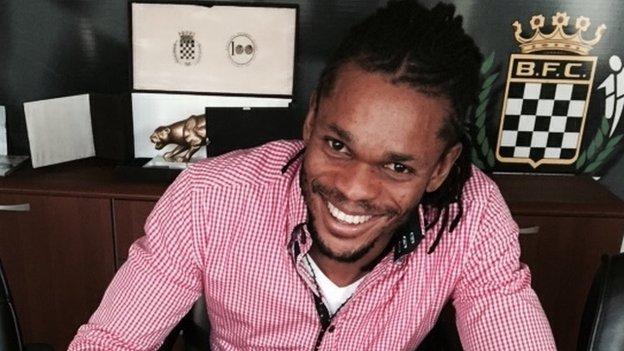 Portuguese club Boavista have completed the signing of Nigeria striker Michael Uchebo on a free transfer.

The 24-year-old, who left Belgian side Cercle Brugge at the end of last season, has joined the Primeira Liga club in a three-year deal.

Uchebo told BBC Sport: "My plan is to keep making steady progress in my career.

"I'm very pleased to join Boavista. I believe it's the right club for me and I will give my very best for the team."

The forward, who was part of the Nigeria team that reached the second round of the World Cup in Brazil, had been linked with a switch to the Ukrainian League for several weeks.

"It's true I had contract offers from two teams in Ukraine but my manager and family were not entirely satisfied with the move, due to the crisis in the region," said Uchebo.

And his agent Tony Harris told BBC Sport: "I believe Boavista is a great place for him to showcase his ability. He's a very talented boy with a very good mentality. His best years are still ahead of him."

Uchebo started his career with Nigerian club Enugu Rangers before joining Dutch club VVV Venlo in a three-year deal in 2010.

He soon became an influential player in the team and achieved near cult-status with the fans in 2012 when he scored a late winner in a relegation play-off to keep the club in the top flight.

Uchebo, who had been on trials with Stoke City and Rangers earlier, switched to Belgian club Cercle Brugge in May 2012.

He established himself in Brugge and was duly rewarded with a call-up for Nigeria's friendly against Mexico in March this year.

But he had to wait until 29 May before scoring his first goal for the Super Eagles in the 2-2 friendly draw with Scotland in London.

His goal and overall performance was enough to earn him a seat on the plane to Brazil.

Uchebo made a single appearance at the World Cup, in the last group game against Argentina in Porto Alegre.