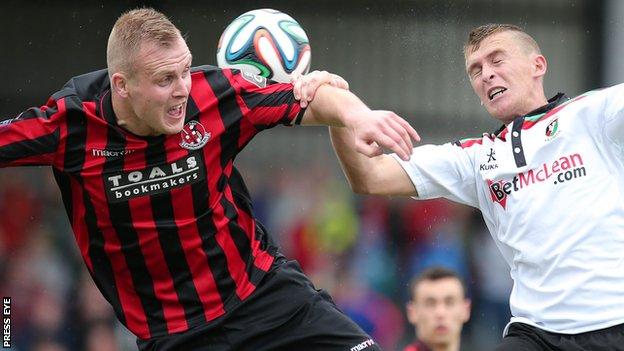 Crusaders boss Stephen Baxter expects a stern test in Saturday's Premiership clash against a Glentoran side unbeaten in their last six league games.

The Glens warmed up for the Oval game by thumping Glenavon 5-1 in the League Cup on Tuesday night.

Baxter said: "Glentoran are on a bit of roll and they have young players with quality and pace - it will be tough."

Michael Clarke and Philip Mitchell are on commentary for the early game between Glentoran and Crusaders at the Oval.

Joel Taggart and Stuart Elliott are at Solitude for Cliftonville v Portadown while there will be updates from Ballymena v Dungannon.

Ballymena are just three points off the top and they have good memories of their last meeting with the Swifts, winning 3-0 at Stangmore Park in August.

Dungannon are without a win in seven Premiership matches and have slipped to second bottom, just a point clear of basement boys Ballinamallard United.

"It's going to be difficult - Dungannon are not conceding many goals although they are not scoring many either," said United manager Glenn Ferguson.

"Knowing the run they are on they will be looking to consolidate and get back to achieving positive results.

"We'll have a gameplan to work on their weaknesses they have, but we have to be wary as they are quite strong, pass the ball well and are quite lively up front."

Cliftonville will draw level on points with the Ports if they emerge victors from the Solitude showdown.

Both teams progressed to the League Cup quarter-finals in midweek with the Reds beating Carrick Rangers 4-1 while Portadown eased to a 3-1 win over Knockbreda.

Glentoran lie sixth but only four points off the top while Crusaders sit third and two points behind the Ports and Linfield, who are not in action until Monday night.

"It will be a difficult place to go, I'm sure of that, but we will go to the Oval and compete well," added Baxter.