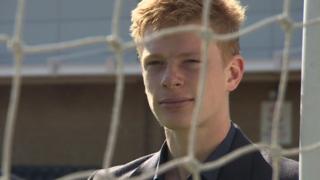 Chelmsford City are one of many non-league clubs competing in the third qualifying round of the FA Cup this weekend, but amongst their ranks is a famous football name.

Chelmsford goalkeeper Niklas Freund is the son of Steffen Freund, who won the League Cup with Tottenham in 1999, the European Championship with Germany in 1996 and was also part of Borussia Dortmund's Champions League-winning squad in 1997.

The Clarets travel to fellow Conference South side Whitehawk on Saturday, with the winners gaining £7,500 in prize money and moving one step closer to a place in the first round proper.

This video is available to UK audiences only.

Watch: UK Championship - Wilson one frame from victory against Maflin