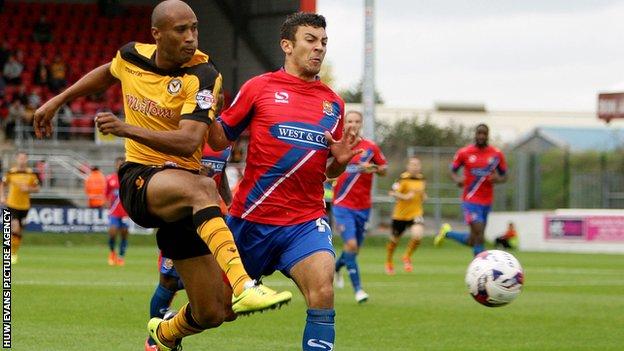 Chris Zebroski secured a second successive victory for Newport County in League Two with a late winner at Dagenham & Redbridge.

Home captain Abu Ogogo was sent-off with 10 minutes remaining after lashing out at Lee Minshull.

"We did every thing but score. They scored and they toook the three points- but the game has changed from the referees decision.

"When it's 0-0 it gives them a chance to get into the game- we should have scored one or two goals in the first half.

"Abu Ogogo's red was not a sending off. Lee Minshull has got him round the neck and their assistant manager has just come in and said it wasn't a sending off."

"We're slightly fortunate to take away all three points. I think a draw would have been a fair result but I've stood here before and we've deserved out of games.

"Sometimes you've got to win ugly and we've done that today.

"When you come away from home you have to be solid and I thought we were. It took us a little while to get a grip of the game."