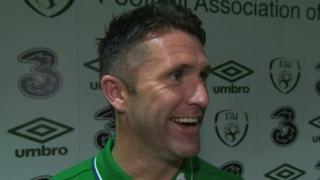 Robbie Keane says the Republic of Ireland's attitude was 'spot-on' in the 7-0 win over Gibraltar as his hat-trick made him the leading scorer in the history of European Championship qualifiers.

"From Monday, we have been so focused on Gibraltar. We haven't spoken about Germany once. That's very important," Keane told BBC Sport.

Keane bagged his hat-trick in the opening 18 minutes to put the Republic 3-0 up as he moved ahead of ex-Turkey striker Hakar Sukur as the top marksmen in European qualifying campaigns with 21 goals.