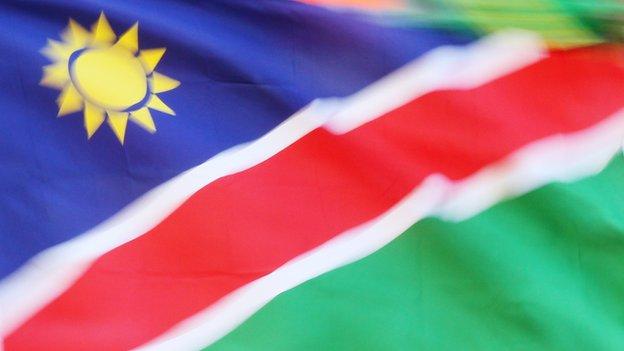 Hosts Namibia began their 2014 African Women Championship campaign with a 2-0 win over a resilient Zambia on Saturday at the Sam Nujoma Stadium in Windhoek.

Goals from Rita Williams and Thomalina Adams in the first half gave the Brave Gladiators a perfect start at the biennial championship.

The debutants went ahead in the fourth minute through Williams who slammed home from a goalmouth scramble.

Helen Mubanga, Kabange Mupopo and Susan Banda had chances to score for the She-polopolo but Namibian goalkeeper Lydia Exais was at her best to deny the trio.

The win put Namibia in top spot in Group A before the group's other match.

In Group A's other match, six-time champions Nigeria were pushed all the way by Ivory Coast as they claimed a 4-2 win at the Sam Nujoma Stadium.

Nigeria had started brightly before some all-too-familiar sloppiness at the back allowed Ivory Coast to grow in confidence.

Most notably, Christelle N'Guessan and Rebecca Elloh shot wide on two occasions at the end of a slick move from the Ivorians.

Nigeria restored their lead on 54-minutes profiting from defender Mariam Diakite's own goal, before Desire Oparanozie added the third in the 74th minute.

But again Ivory Coast pulled a goal back under a minute with Christine Lohoues Yeble firing home.

Three minutes from time, Asisat Oshoala deftly floated a cross from the right to Oparanozie who fired home to seal the victory.

"We knew Ivory Coast will be tough because they stopped defending champions Equatorial Guinea, but we need to improve further on this performance," said Super Falcons coach Edwin Okon.

Both Nigeria and Namibia are on three points in first and second place respectively but Ivory Coast in third will be looking to get their campaign back on track when they face the hosts on Tuesday.

On Sunday at the Independence Stadium, Windhoek, regular campaigners South Africa face the Indomitable Lionesses of Cameroon in what promises to be an explosive Group B opener.

Ghana's Black Queens are favourites against Algeria in the group's other match.

The championship serves as qualification for the Fifa Women's World Cup to be held in Canada from 6 June to 5 July, 2015.