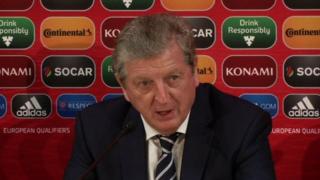 No complacency in Estonia - Hodgson

England manager Roy Hodgson says there will be no complacency from his team when they take on Estonia in their Euro 2016 qualifier on Sunday.

England beat San Marino 5-0 at Wembley on Thursday, but Hodgson expects a much tougher test in Tallinn, saying Estonia are "capable of causing upsets and winning games".

Captain Wayne Rooney echoes Hodgson's call to guard against "over-confidence", and says the players are looking forward to the challenge.