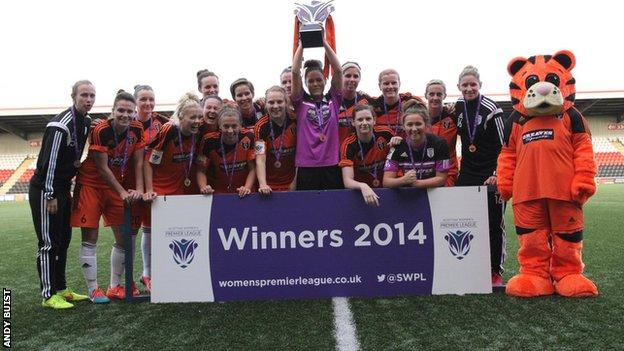 Glasgow City were presented with the Scottish Women's Premier League trophy for the eighth successive season after a 3-1 win over Hibernian at Airdrie.

City clinched the title with three games to play and three first-half goals from Jo Love, Fiona Brown and Denise O'Sullivan put them in the mood to celebrate.

Elsewhere, Aberdeen captain Rachel Small put her side 1-0 up against Rangers, only for Kathryn Hill, Lisa Swanson and a Dons own-goal to put Rangers well ahead.

However, a late second-half rally by Aberdeen ensured a 3-3 share of the spoils as Small found the net again and Rebecca Dempster scored from a Dons corner.

Rangers move into second place ahead of Hibernian on goal difference with one game remaining.

Buchan won the battle between the SWPL's bottom two sides as they defeated Queen's Park 5-2 and in turn give themselves a fighting chance of survival. Hutchison Vale won a tight 2-1 contest against Forfar, meaning the Angus side are still not out of danger and could well find themselves going down with either Queen's Park or Buchan.