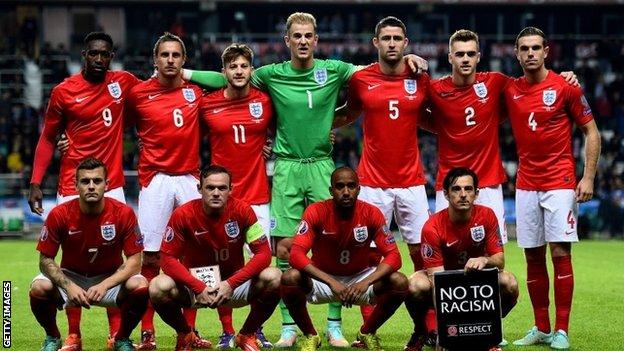 England struggled to impress on their way to picking up their third victory from three Euro 2016 qualifiers with a 1-0 win against 10-man Estonia.

Wayne Rooney scored the winner - his 43rd goal in 99 appearances for the national side - as Roy Hodgson's men maintained their 100% record in the campaign.

But how did the Manchester United striker fare overall? Was he the pick of the bunch in Tallinn?

Check out my ratings below:

He's effectively had two games off. A bystander.

Did you know? Has kept four successive clean sheets for the first time in his England career.

He will have an England career, but he will not have it at right-back - as applies to his young contemporary John Stones. Often looked uncomfortable.

Did you know? Made more touches than any other player in the game - 114.

Showed the sort of authority to be expected when there is such a gulf in class. Steady on the rare occasions required.

Did you know? Made more passes than any other player in the game - 90.

Same as Cahill. Barely a thing to do and a breeze for Everton's captain.

Did you know? Made five clearances for England, no-one else made more than one.

Whether it was England's system or simply part of the overall performance, he did not get forward as often as usual in a display that lacked width.

Did you know? Collected only his second yellow card in 29 appearances for the Three Lions.

A very quiet night for Aston Villa's midfield man after the promise of his first start in the win against Switzerland.

Did you know? Completed 28 of 31 passes in the opposition half.

Good first half when he provided much of the attacking impetus from the base of England's diamond. Faded in a poor second half but was the main creator and gets the vote as England's man of the match.

Did you know? Created five goalscoring chances, more than any other player in the game.

Usual energy but had little impact and was taken off just after the hour.

Did you know? Has played in four successive England wins after winning only two of his previous 10 outings for the national side.

Started brightly with his trademark neat footwork but faded in the second half.

Did you know? Had four shots, but none of them were on target.

Not as effective as in the two previous matches in the Euro 2016 qualifiers.

Did you know? Had only six touches in the opposition box in 80 minutes of play, compared to seven from Alex Oxlade-Chamberlain in 29 minutes.

Mixed night for England's captain. Guilty of poor touch and control on many occasions but showed his class to produce the crucial breakthrough and deliver another reminder of why he is so important to England.

Did you know? Has now scored 31 competitive goals for England, more than any other player in the country's history.

Provided some of the width and pace that was so sorely needed and England looked marginally better for his presence.

Felt he was too tired to start but at least won the free-kick that led to Rooney's goal.

No time to have any impact.