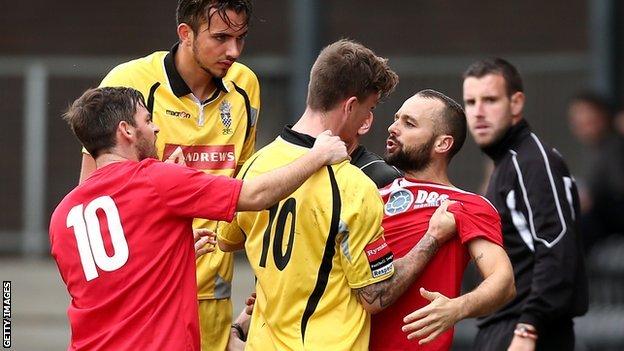 Three teams from the ninth tier of English football are one win away from the FA Cup first round proper after wins in the third qualifying round.

Shildon, of Northern League Division One, drew 0-0 with Stourbridge to earn a replay.

The fourth qualifying round draw takes place on Monday.

Three other sides from the ninth tier - Flackwell Heath, Runcorn Town and Winchester City - fell at what is step five of the FA Cup after the extra preliminary round, the preliminary round and two qualifying stages.

Former Blackpool and Blackburn striker DJ Campbell was in the Maidenhead side that drew 1-1 with Gosport Borough while Stockport County, a Championship club in 2002, are through after a 1-0 win against Ilkeston.

AFC Fylde and Basingstoke Town, the highest-placed teams in the draw as leaders of the Conference North and Conference South respectively, are both into the next round. Fylde beat Buxton 1-0, while Basingstoke won 2-1 at Ebbsfleet.

Whitehawk and Chelmsford City face a replay after sharing eight goals in a 4-4 draw.

Full results of the third qualifying round of FA Cup can be found on this website.