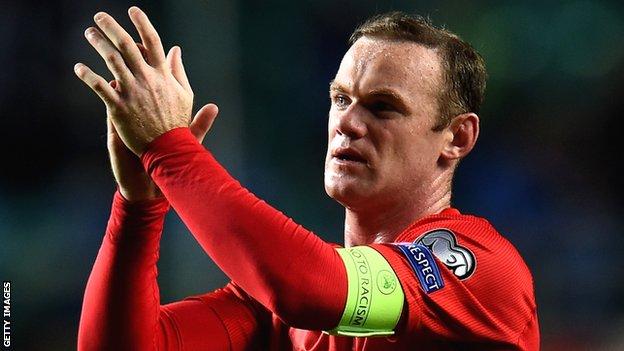 "Wayne Rooney is not worth his place in the starting line-up. People talk about him in the same breath as someone like Cristiano Ronaldo, but that miss tonight in the 93rd minute could have cost us a goal that could cost us qualification. Rooney's confidence is shot. He's trying to be the best man around, but he's playing the worst of anybody. If Roy Hodgson's picking a team of players in form then Wayne Rooney should not be in the team. He scored the winning goal, but that's all he's done in two games."

"But that's a massive thing. Wayne Rooney is still a quality player. He might be suffering with confidence, but when that one moment came this evening, he scored it. No-one else did."

Wayne Rooney will always be a lightning conductor for debate and conjecture in an England context.

His performance against Estonia in Tallinn provided ammunition for those who continue to doubt his international pedigree - but also confirmation of his class for those who support him.

Rooney's sure touch was surprisingly lacking in the penalty area, particularly in the first half when England's domination of possession touched 82% at one point, yet it was still the captain who dug out the win with his 73rd-minute free-kick.

And in that match-deciding moment, the 28-year-old Manchester United forward showed his enduring quality.

It took Rooney to 43 England goals, six behind record holder Sir Bobby Charlton and one shy of the great Jimmy Greaves. If he had been on top of his game against San Marino and Estonia, he would be entering next month's qualifier at home to Slovenia, and the friendly against Scotland in Glasgow, standing at the very edge of history.

Instead his finishing was mixed, but he was still the man who made the most vital contribution in Tallinn on a night, and at the very moment, when England and manager Roy Hodgson were threatening to be frustrated.

In some respects it was the sort of game by which Rooney's international career will be judged. He will, barring injury, be his country's most prolific goalscorer but many will still ask questions about his contribution.

Some will view it through the prism of his disappointing performances at major tournaments following his stunning entry as an 18-year-old Everton player at Euro 2004, while his backers will point to the consistency of an excellent goalscoring record of 43 goals from 99 England appearances.

As he approaches his 100th cap it will be asked 'is Rooney an England great?' In reality he has been a very good England player rather than the great one he threatened to be as a teenager.

Rooney, though, has still made an excellent contribution for his country, and when England and Hodgson needed someone to rescue them as Estonia's fans sensed an unlikely point, he obliged.

His record and his ability to shape the outcome of important matches suggests he is still someone they cannot do without.

Matthew Hopkins: Only in England would it even be questioned whether the potential top goalscorer of all time is any good at all.

Gary Miles: The tip of the diamond is blunt and pointless. Diamond OK but Rooney is a problem.

Mark_Lynch: Rooney scored the winner, but how many did he miss? When was the last time he scored for us from open play that wasn't a tap-in?

Raheem Sterling's absence from the starting line-up - after Hodgson revealed the Liverpool teenager told him he was feeling tired - generated a lot of heat in freezing Tallinn.

How can a 19-year-old be tired in the early weeks of October? How can he be jaded after only playing 45 minutes of the 5-0 win against San Marino? Is this the spectre of club v country rearing its head again?

Arguments were made on all sides with an extra gloss of intrigue after Liverpool manager Brendan Rodgers made no attempt to disguise his fury when striker Daniel Sturridge injured a thigh training with England after the 1-0 win against Norway at Wembley on 3 September. He has not played since.

Hodgson came under heavy pressure about Sterling after England's win in Estonia. He handled it in a measured manner. He is clearly not angry with Sterling and actually gave him credit for coming clean about his condition.

He said: "On Saturday he told me 'I'm feeling really tired and I don't think I'm in my best form at the moment'. It would be wrong of players to fool me into thinking they are ready when they are not because they are robbing another player of an opportunity."

Of course Hodgson could be leaving himself open to allegations of naivety or even pandering to Liverpool after the recent Sturridge row - but the truth is probably less interesting and is actually the version of events Hodgson delivered in a small room beneath Le Coq Arena.

Sterling is certainly not immune to fatigue despite his tender years and there is no doubt he has fallen short of the blistering form that played such a part in almost taking Liverpool to the Premier League title last season.

He has not just had physical demands to cope with, but also emotional demands. Sterling was part of a Liverpool squad that had the title in their grasp last season only for it to slip away, a matter of grave disappointment after 24 years without winning the league.

He was then one of the few England players to return from the World Cup in Brazil with his reputation enhanced, the spotlight shining on him pretty heavily during a short stay in South America.

Liverpool have struggled so far this season and expectation has risen around Sterling, along with a debate about when and if he will sign a new deal at Anfield.

So, for one game against opposition England should beat with or without Sterling, Hodgson was hardly gambling the house on playing without him.

Sterling's Liverpool team-mate Adam Lallana had done well against San Marino in a 45-minute appearance so it was not a high-risk strategy - and Hodgson could still call on him for a cameo.

And so it proved when Sterling was brought on after 64 minutes and earned the free-kick from which Rooney won the game.

He will be needed for sterner battles ahead, so there did not appear to be huge drama in the decision to take Sterling at his word and rest him.

There was no doubt the collateral damage from the disagreement over Sturridge added to the conversation about Sterling - but no harm done for England and, more likely than not, Liverpool or their player.

What next for England?

England's win in Estonia lacked excitement and was short on a sprinkling of stardust - but in a Euro 2016 qualifying group without the showbiz element, this may become the norm.

Hodgson can point to nine points from three games without a goal conceded and while the diamond formation is a healthy option, England need to produce more variety.

England are not edge-of-the-seat box office material but it is hard to mount the critical case against a team with maximum points.

They face Slovenia next in a Euro 2016 qualifier at Wembley but the real excitement may actually come from friendlies - and they do not come any tastier than meeting Scotland in Glasgow next month.

There will be a growing confidence in Glasgow that 'The Auld Enemy' can be put away when they meet at Celtic Park against the improving Scotland.

If San Marino and Estonia were low-key, facing Scotland on their own turf will be anything but.