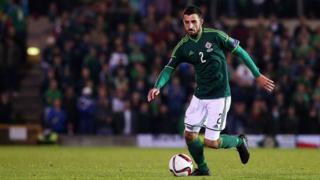 Northern Ireland defender Conor McLaughlin says the squad will not get carried away by the fact that they top Euro 2016 qualifying Group F after winning their first two matches against Hungary and the Faroe Islands.

"We expect a different type of game against Greece on Tuesday - we probably won't see as much of the ball as we did against the Faroes and the Greeks are renowned for creating a hostile atmosphere," said McLaughlin.

The Fleetwood Town player describes playing his first home game at Windsor Park on Saturday as "a brilliant experience".