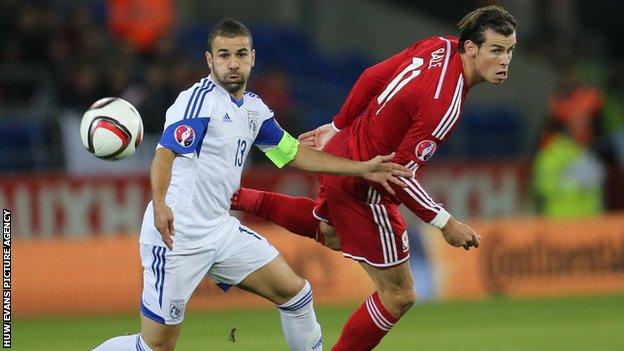 Wales maintained their unbeaten record to to remain top of their Euro 2016 qualifying group with a precious 2-1 victory over Cyprus in Cardiff.

Chris Coleman's side appeared to be coasting as goals from David Cotterill and Hal Robson-Kanu - the latter a stylish team effort - gave them an early 2-0 lead.

But a goal from Vincent Laban and a red card for Wales midfielder Andy King set up a nervous second half.

Which players impressed and who had an evening to forget? Marks are out of 10.

Had little to do but made a hash of the Cyprus goal. A stark contrast to his man-of-the-match display against Bosnia-Hercegovina.

An energetic effort which did not wane even as Wales went down to 10 men. Distribution could have been better but defending was solid.

Marshalled the defence in a mature display, ensuring the team approached the game in a calm fashion after being reduced to 10 men.

Another fine performance from the Hull defender, who made a number of timely interventions and brave challenges.

Composed defensively and a willing support runner in attack, the Swansea City left-back contributed to an industrious team performance.

An early yellow card curbed his usual tenacity and forcing him to tread tentatively compared to his forceful display against Bosnia.

A promising first-half performance with some neat touches was spoiled by his red card, which made life very difficult for his team-mates.

Excelled in a couple of positions, whether that was out wide or as a central attacker, and took his goal smartly.

Subjected to brutal treatment from Cyprus but battled on regardless and went close with a couple of efforts.

A bright first start from the young winger, running at Cypriot defenders at every opportunity. His positivity led to the corner which produced the first goal.

Had no time to make an impact after he was taken off inside two minutes with a shoulder injury.

Scored the opening goal and kept the ball well when Wales were looking to hold on to their lead in the second half.

Brought on to solidify the midfield following King's red card and did so with a combative but composed performance.

Ran out of time to make any telling contributions on his debut.