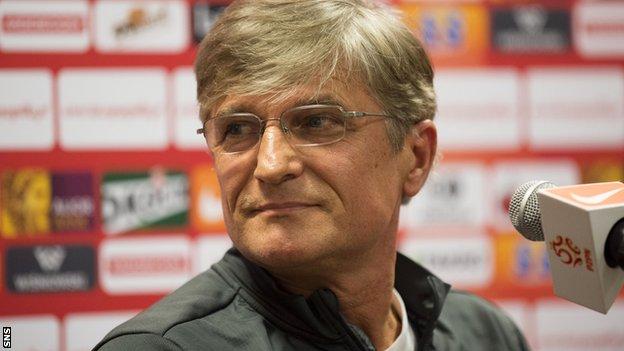 Manager Adam Nawalka has no fears that complacency will creep in when his Poland side entertain Scotland in Euro 2016 qualifying on Tuesday night.

The Poles picked up their first ever win over world champions Germany on Saturday night in Warsaw.

And afterwards goalkeeper Wojciech Szczesny admitted the historic result could lead to some players taking their eye off the ball against Scotland.

But Nawalka said: "As soon as the game ended we were thinking about Scotland."

He added: "The team is actually very calm and modest. I think we will show that we are heading in the right direction.

"We have to be prepared mentally and physically and we need a good game plan like we had against Germany."

Arkadiusz Milik scored the opener in the 2-0 triumph over Germany, and he highlighted the modesty his manager spoke of when asked about how he is adjusting to his new-found fame.

"But we are trying not to think about that. We're concentrating on the game against Scotland. That's our priority."

Scotland go into the match fresh from a 1-0 win over Georgia at Ibrox on Saturday.

And Poland's former Celtic goalkeeper Artur Boruc, who is in the squad for the match in Warsaw, heaped praise on Scotland manager Gordon Strachan, his one-time boss at Parkhead.

"He's a great coach and an absolutely great character," said Boruc, currently on loan at Bournemouth from Southampton.

"He has done a lot of great work in the past 18 months as coach of Scotland.

"He has great characteristics and a great attitude as a coach towards his players. He has helped the team really, really well and the progress in the last few months has been very, very good."