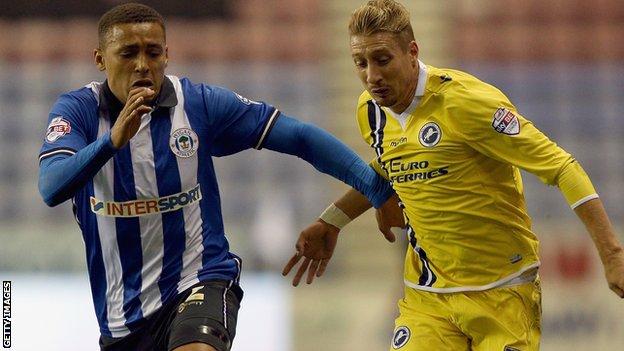 Wigan drew for the third home game in succession as they were held by a resolute Millwall side.

The hosts dominated throughout at a windy DW Stadium, but lacked a cutting edge in the final third.

Millwall's best chance fell to Ricardo Fuller, but the striker mis-controlled with just Scott Carson to beat in the Wigan goal.

The hosts' profligacy was evident from the outset, when they had been gifted an opportunity when Forde failed to clear, but James McClean fired into the side-netting.

Scott McDonald's 30-yard effort, held by Carson, was one of few chances for Millwall in the first half.

They should have taken the lead soon after the restart when Lee Martin's free-kick found Fuller, but he could not make the final, decisive touch.

It served as a warning for Wigan, and manager Uwe Rosler sent on McManaman to try and give the hosts more bite in attack.

The forward almost made an instant impression as his dipping effort beat Forde but bounced off the crossbar in what was the last, decent chance of the game.

Wigan are 19th with 12 points, while Millwall are one place and two points better off.

"I am frustrated with the result, obviously, but I thought we did everything right apart from the last 20 metres.

"Millwall have had some decent results on the road this season but we restricted them to just one chance, when we lost a man at a free-kick.

"Apart from that we did everything right, which is the positive thing. We got into good areas and we put the ball into the box. But our movement in the box still isn't good enough."

"There was a lot of jousting, not much happened, but I thought it was quite a good game considering the conditions.

"I didn't want to just come here and waste time and get a point - I wanted to win."