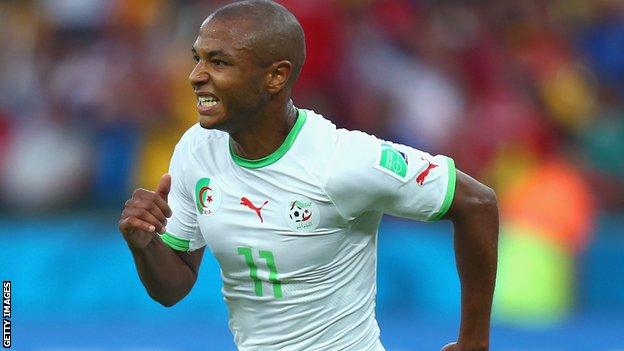 Algeria and Cape Verde became the first teams to qualify for January's Africa Cup of Nations finals in Morocco.

Algeria booked their place with a 3-0 win over visiting Malawi, while Cape Verde edged out Mozambique 1-0 to qualify (see Group F for details).

The first goal of Algeria's game in Blida came after just a minute as Porto's Yacine Brahimi fired high into the net after a neat one-two with Islam Slimani on the edge of the area.

Riyad Mahrez, who plays for English Premier League side Leicester City, doubled the lead on the stroke of half-time.

He picked up a superb through ball from Sofiane Feghouli before turning inside a defender and finishing with a low shot.

Mahrez then turned provider as his cross was met by Slimani's head to confirm Algeria's place at the Nations Cup finals.

Earlier Ethiopia, despite playing the last 30 minutes with 10 men, avenged their loss on Saturday at home to Mali with a surprise 3-2 win in Bamako.

Bakary Sako, who plays in the English Championship, gave the hosts the lead after 32 minutes but that was cancelled out just four minutes later by Egypt-based Oumed Oukri.

Getaneh Kebede was hero and villain for Ethiopia - first giving his side the lead on the stroke of half-time but then getting himself sent off 12 minutes after the break.

Mali made the extra man tell and equalised through Mohamed Yatabare with 20 minutes left to play, but in the final minute defender Abebaw Butako scored to give his side a vital three points.

The results mean Algeria have a maximum 12 points guaranteeing them a top two finish, Mali stay second despite losing on six points while Malawi and Ethiopia both have three.

The top two from each group and the best third-placed side qualify for the tournament in Morocco.

South Africa missed the chance of qualifying for the finals in Morocco after being held to a goalless draw at home by Congo.

A victory for Ephraim 'Shakes' Mashaba's side over Claude Le Roy's charges in Polokwane would have been enough for Bafana Bafana, but they must now wait until the final weekend of qualifiers.

Earlier in the day, defending champions Nigeria avenged Saturday's defeat in Sudan by beating them 3-1 in Abuja.

The victory gave the Super Eagles their first group points and keeps alive their hopes of making a recovery from their disastrous start which has left the African champions at risk of failing to qualify to defend their title.

Ahmed Musa's opening goal just after half-time should have settled the nerves of Stephen Keshi's side but they were pegged back by Salah Ibrahim.

Nigeria regained the lead through Aaron Samuel Olanare and Guinea's challenge was finally seen off when Musa scored his second of the match.

Despite their first victory of the qualifiers, Nigeria remain third in the table with four points.

South Africa are top with eight points, just one above Congo, while Sudan are bottom on three points.

Despite playing 83 minutes with 10 men, Gabon earned a 1-1 draw against hosts Burkina Faso.

Yrondu Musavu-King, who plays in the third tier of French football, was dismissed after just seven minutes of the game for Gabon.

UAE-based Jonathan Pitroipa then gave the hosts the lead on the half-hour mark.

A goal in the 70th minute from Wydad Casablanca's Malick Evouna rescued a point for Gabon.

Angola thumped Lesotho 4-0 to lift themselves off the foot of the table.

The hosts struck after only two minutes through Bastos and Ary Papel made it 2-0 before the break. Lesotho contributed to their own downfall when Tsoanelo Koetle put through his own net and the rout was complete when Love hit a fourth on 57 minutes.

The results mean that Gabon still top the group, with eight points, just one ahead of Burkina Faso, with Angola on four and Lesotho bottom with just two points.

Cameroon took a huge step towards qualification for the 2015 Africa Cup of Nations with a 2-0 victory over Sierra Leone on Wednesday.

Leonard Kweuke opened the scoring for the Indomitable Lions after only four minutes and Stephane Mbia added a second three minutes later.

That proved enough for Cameroon to bounce back from being held to a 0-0 draw when the sides met last Saturday.

The win for Cameroon meant they and Ivory Coast would have qualified for the finals if the Elephants had overcome visiting DR Congo.

Instead there was a shock 4-3 defeat for Ivory Coast, just their second home defeat in 52 qualifiers, at the hands of DR Congo in the other Group D encounter.

Neeskens Kebano got on the end of a pass from Chancel Memba to give the visitors the lead after 21 minutes.

Ivory Coast drew level just four minutes later through Yaya Toure, but two goals in as many minutes before half-time from Junior Kabananga and then Jeremy Bokila put DR Congo in control at 3-1.

The Elephants looked like they were out of the game moments into the second half when Franck Kessie was shown a straight red card.

However Salomon Kalou then scored two superb goals in a three-minute spell to level the scores.

The final twist came in the 89th minute, when Bokila grabbed his second of the game and sealed a shock three points for DR Congo.

The results mean Cameroon are top of Group D with 10 points, Ivory Coast and DR Congo are both on six with Sierra Leone bottom, five points adrift.

Under the Confederation of African Football's regulations, DR Congo are above Ivory Coast as they have scored more away goals in the matches involving the two nations.

The Black Stars, who are being led by caretaker coach Maxwell Konadu while a new permanent boss is sought, opened up a two-point lead at the summit but were forced to fight hard to do so.

Asamoah Gyan opened the scoring for the hosts in Tamale but Guinea hit back through Ibrahim Yattara before half-time.

An Andre Ayew penalty restored Ghana's lead after the interval and Emmanuel Agyemang-Badu scored a third deep into injury time.

The win revives the Black Stars' campaign after they were held 1-1 in Guinea last weekend.

Earlier in the day, Togo beat Uganda 1-0 to complete a double over them having inflicted their first home defeat in 10 years on Saturday.

Uganda's best chance fell to substitute Brian Majwega, who fired wide with only the goalkeeper to beat early in the second half.

"We were punished by one chance just like in Kampala and failed to take our chance," Uganda coach Milutin 'Micho' Sredojevic said after the game.

Togo's captain Emmanuel Adebayor also spoke after the match: "I am happy that we have won this crucial match.

"And I am happy that other players including defenders are now getting opportunities to score for the team."

The win briefly moved Togo from bottom to top of the table, until Ghana pushed them into second place.

Cape Verde qualified for their second straight Nations Cup finals with a 1-0 win over visitors Mozambique.

Heldon, who plays for Portuguese side Sporting Lisbon, grabbed the only goal of the game in Praia with 15 minutes left to play.

Earlier, 2012 African champions Zambia ended a three-match winless run by brushing aside Niger 3-0 in their Group F match in Niamey.

Rainford Kalaba struck the first goal of the game, Emmanuel Mayuka added a second and goalkeeper Kennedy Mweene wrapped things up from the penalty spot.

The results mean Cape Verde stay top of the group on 9 points, Zambia and Mozambique both have five points while Niger have just two.

Cape Verde are guaranteed to finish in the top two in the group even if they lose their last two games thanks to their better head-to-head record with both Zambia and Mozambique, who could both finish on nine points.

Tunisia left it very late to beat Senegal 1-0 and move ahead of them in the table.

The two sides drew 0-0 on Friday in Dakar and the game in Monastir looked to be heading for the same scoreline until Ferjani Sassi found the target in the fourth minute of added time at the end of the match.

Earlier in the day, seven-time title-holders Egypt claimed a second consecutive 2-0 win over Botswana in Cairo to keep in the hunt for a place at January's finals in Morocco.

After a goalless first half Amr Gamal opened the scoring for the Pharaoh's in the 52nd minute.

Chelsea forward Mohamed Salah was then on target with his second in as many games for Egypt.

The results mean that Tunisia move to the top of the group on 10 points with Senegal in second on seven points.

Egypt despite their two wins remain in third place with Botswana out of the running for Morocco without a single point so far.