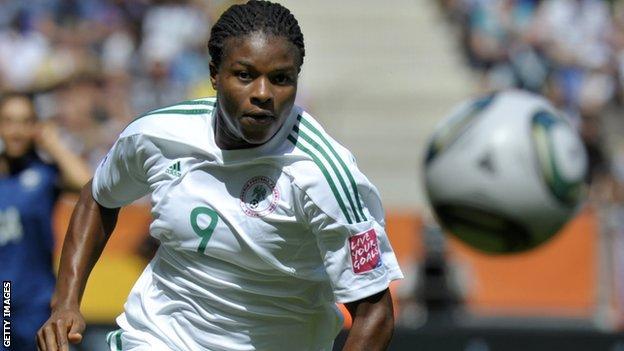 Nigeria hammered Zambia 6-0 to book their place in the semi-finals of the African Women's Championship in Namibia.

The record six-time champions made easy work of Tuesday's Group A match, with Desire Oparanozie scoring a brace and Ngozi Okobi, Osinachi Ohale, Asisat Oshoala and Perpetua Nkwoch all scoring a goal each.

As well as suffering a humiliating scoreline, the She-polopolo had right-back Grace Zulu sent off six minutes before half-time.

Nigeria opened the scoring after only two minutes when Okobi connected from a Asisat Oshoala effort from close range.

Three minutes later Ohale nodded in a free-kick and when Oparanozie scored with a penalty after a handball, Nigeria were fully in control.

Zambia's task was then made impossible when Zulu was sent off following a second yellow for a foul on Oparanozie.

After the break the Super Falcons made their numerical advantage pay when Oshoala headed in a corner to make it 4-0.

To their credit, She-polopolo then held out until the 81st minute but succumbed when Oparanozie scored the fifth goal and soon after substitute Perpetua Nkwocha completed the rout.

The result gave group leaders Nigeria six points, and they face hosts Namibia in their final match on Friday.

Namibia lost 3-1 to Ivory Coast in Tuesday's later kick-off but they will still make it to the semi-finals if they beat Nigeria and the Ivorians fail to beat Zambia on Friday.

However, Ivory Coast will fancy their chances after two late goals gave them victory against Nambia and left the two nations level on three points in the group.

Estelle Nah, who joined up with the Ivory Coast team only days before the game after her release by her Russian club, WFC Zvezda, made an almost instant impact when she opened the scoring on 13 minutes, tapping after Josephine Leyo's free-kick came back off the post.

But midway through the first half Zenatha Coleman equalised with a superb free-kick.

Ivory Coast pressed hard for a winner after the interval and they finally regained the lead when Ines Tia finished following a mazy run by Jeanne Nadege.

Tia grabbed her second in stoppage time when she headed in from a free-kick.