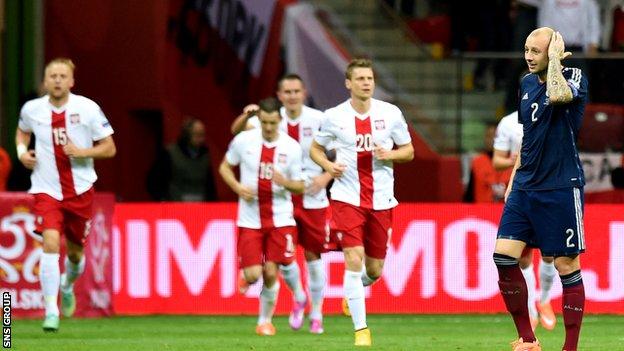 Alan Hutton was unhappy with his own display in Scotland's 2-2 draw in Poland but drew satisfaction from an impressive team effort.

The Aston Villa full-back was at fault for both Polish goals during a thrilling tussle in Warsaw.

"It's frustrating from a personal point of view," admitted the 29-year-old.

"It shows how from we've progressed that we're disappointed with a draw in Poland. We've come so far in the last few years."

A clumsy touch from Hutton on the edge of his own penalty box allowed Krzysztof Maczynski to shoot the hosts into an 11th-minute lead.

And the defender lost Arkadiusz Milik, who drilled in the equaliser after Scotland had taken the lead thanks to goals from Shaun Maloney and Steven Naismith.

"When you come to play an away game against a team like this you know it's going to be tough but overall we're disappointed we didn't get the three points," Hutton told BBC Scotland.

"We showed we can come away to tough grounds and tough atmospheres and play well. There were some great performances on the night as well. We could've sneaked it.

"At the first goal, I could have done better, it came to me and I've not taken a great touch.

"It's disappointing but the team is the main thing, me not playing my best is just one of those things."

Scotland are fourth in Group D after three games, level on points with Germany, while Poland and Republic of Ireland lead the way, having both taken points from the world champions.

Gordon Strachan's men are are at home to Republic of Ireland next month and the visitors are sure to be buoyed by their 1-1 draw at the Stadion Gelsenkirchen.

"We always knew at the start of the group how tight it was going to be and there are some big games coming up now, the next one against Ireland is going to be a massive one for us," added Hutton.

"We're playing well and hopefully we'll take our good form into that one and see what we can do.

"You're hoping Germany can get the win there but Ireland are a strong team just like us, so we knew they would put on a good performance and it just makes next month's game even bigger."

Naismith, who slid in to convert a James Morrison free-kick against the Poles, is also targeting a win against the Irish.

"It's a good point for Ireland but if we can get the points at home that will go a long way to getting a qualification spot, rather than worrying about each team you're playing," said the Everton forward.

"There's a lot of games to go and we're confident going into every game, as we've shown, that we can get points out of them."

David Marshall was kept busy in Warsaw, making one fantastic save to deny Robert Lewandowski, and the goalkeeper was full of praise for his team-mates who worked hard to shackle the Bayern Munich striker.

"The boys in front of me were superb all night and that's been one of our strengths for the last 18 months," said the Cardiff keeper.

"It's a tough place to come, especially with their fans behind them after beating Germany. We'll take that and as long as we win our home games it should be a good point.

"Getting points away is great as long as we can win the home games.

"The gaffer has given us confidence, we have a way of playing now and the boys all trust each other. Performance-wise we've done really well in the first three games - we'd have liked more points but it can stand us in good stead for the rest of the campaign."