The fourth BBC Price of Football study has covered 176 clubs across 11 divisions in British football and 31 clubs from 10 leagues in Europe.

Some ticket prices in England have risen at almost twice the rate of the cost of living since 2011.

Fans from across the UK have been getting in touch to tell us what they think of the findings and the cost of a typical day out at a game, and giving us their stories of how much they pay to follow their club.

We've put together a selection of those views - and you can still have your say.

You can also see how much you spend following your team using the Price of Football calculator.

What fans had to say

Matt Dann in Cambridge on text: I ditched overpriced Premier League football a few years back in favour of the lower leagues. I pick a team at random each season to follow for a few games. This season it's Grimsby.

Matt Wolstenhome on Twitter: Football clubs are businesses. They want our dosh. If fans stop paying for tickets, prices will come down. Just don't go!

James Poole on Facebook: What doesn't seem to be considered is the rising cost of running football clubs. Bringing in world-class players (Falcao, Sanchez, Ozil etc) is going to cost more for the clubs. Maintaining the grounds, additional staff, policing etc are all big expenses and will be passed on to to supporters. Yes the ticket prices are high but people are paying to be entertained by high-class performers for two hours. How much is an evening at a top Broadway show??

Paul Collins on Facebook: There's no English club going that's worth paying the ticket fee for when you look at the Spanish and Germans. Barca season tickets for £103? Bayern for less than £110? They're making the greedy English clubs look pathetic, even more so given they're so cheap and yet still some of the biggest clubs in Europe and successful. They care about their fans and good on them.

James in London on text: Arsenal's season tickets may be expensive, but they also include seven home cup games, as well as the 19 home league games. This is something that is constantly ignored in these ticket price comparison surveys.

George Carter on Twitter: View won't be great from the Camp Nou for a £108 season ticket. Huge stadia allow these teams to have cheaper tickets. 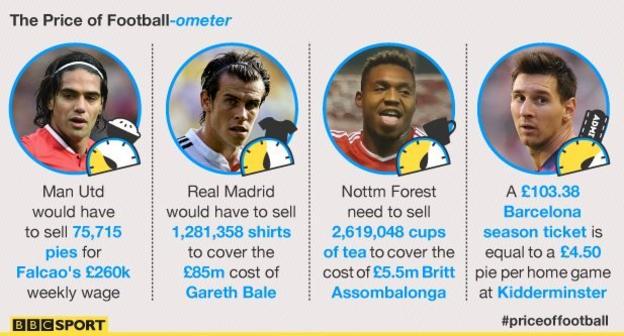 Rob in Brighton on text: Let us just remember where the match day comes from. It was something given to the working class to enjoy after a hard week at work. Now the working class have been priced out. It's not about sport anymore, it's about business.

Rob in London on text: Sport in general in the UK is overpriced. The worst though is international rugby at Twickenham. The World Cup prices are another level again! The German example is one to follow. Why punish the ordinary fan?

Ross in Kent on text: Imagine if all fans boycotted Premier League matches for a week, playing games in empty stadiums, they will then realise that the league is nothing without fans and atmosphere.

Ruairi Dorrity on Twitter: I'm currently living in Hamburg. Eighteen euros gets me a ticket and a beer at a St. Pauli game. Brighton games cost twice as much. 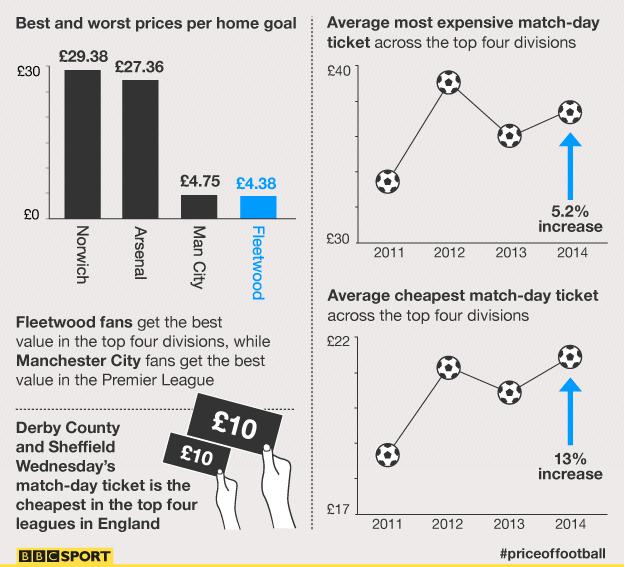 Hazel Clarke on Facebook: If people are daft enough to spend a large amount of their income going to watch overpaid footballers, then that's their business, but don't cry afterwards [about] how hard they are finding it to live!!

Jo Sims in Bristol on text: I only get paid every four weeks. The government takes too much of it already. Look at the attendance for England the other night - the FA needs to come down to our level or risk alienating fans.

Daniel Hodgkin on Twitter: The biggest rip-off is not the Premier League, but lower leagues. Paying £20 a time to see Fourth Division football? Madness!