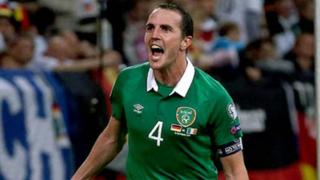 John O'Shea celebrates his 100th Republic of Ireland cap by scoring a dramatic injury-time equaliser in the Euro 2016 qualifier against world champions Germany in Gelsenkirchen.

Germany dominated the Group D qualifier but after Toni Kroos fired them again on 71 minutes, they were hit by O'Shea's lack sucker punch as the Sunderland man notched only his third international goal.

"To do it on the night in question and after all the amount of caps I have received, is very, very special," said O'Shea, 33.