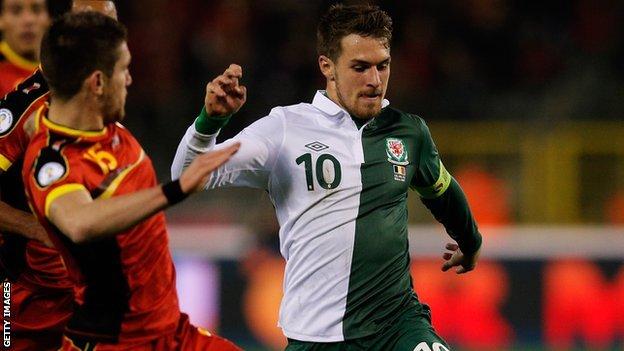 Ramsey, 23, missed Wales' 2-1 win over Cyprus and 0-0 draw with Bosnia-Hercegovina because of injury.

Gunners boss Arsene Wenger said: "Ramsey will be back in full training on Monday."

Defender Paul Dummett and midfielders David Vaughan and Lee Evans also missed the games against Bosnia and Cyprus but could feature for their clubs this weekend.

Newcastle United's Dummett has recovered from a muscular injury and will be in the Magpies squad for their game against Leicester on Saturday.

Vaughan has recovered from a hamstring injury and should be in the Nottingham Forest squad for Saturday's game against Cardiff City.

Uncapped Evans is also set to be included in the Wolves squad for the Championship game at Millwall on Saturday after pulling out of the Wales squad because of a hamstring injury.

Former Swansea City player Allen has not played for Liverpool since suffering a knee injury in Wales' 2-1 win in Andorra on 9 September, since when it is believed he had a double hernia operation.

Wales went into the games against Cyprus and Bosnia-Hercegovina with Ramsey and Allen among 11 players injured.

Chris Coleman's side will go to Belgium top of Group B and unbeaten, having also won 2-1 in Andorra in their opening qualifier.

Wales went into the campaign with renewed hope of qualifying for the finals of a major tournament for the first time since 1958, because of the expansion of Euro 2016.

For the first time, 24 teams will qualify for the competition from nine groups.

The top two teams in each of the nine groups, the best third-placed team and hosts France, qualify automatically.

Another four of the third-placed teams will qualify via play-offs, which will be played in November 2015.