A new breed of innovative minds are at work creating tomorrow's footballer.

The aim is to manufacture athletic perfection, as a small band of elite visual experts, psychologists and skills coaches work towards producing the perfect player, armed with enhanced technique, vision, intelligence and mental resilience.

Tom Bates is a sports psychologist with a twist. He is West Brom's peak performance coach and implements training sessions designed to improve concentration, composure and decision-making on the ball.

It's late April and he's demonstrating a technique known as mirroring at a science and football conference at the London Soccerdome - a vast indoor arena in the south east of the city - in front of a 400-strong band of coaches from across the globe.

The exercise is one Bates uses with youngsters making the transition into the senior setup, as well as the first team itself - including West Brom's hottest prospect Saido Berahino.

A set of coloured markers are laid out on the pitch, with the player required to dribble through them at pace in a sequence of their choice, using any turns or body swerves they deem appropriate. Opposite, a team-mate is tasked with creating a mirror image by copying that exact route in an identical fashion at the same time.

As with all his sessions, Bates has minimal vocal input, interrupting the drill only to offer words of encouragement before asking the players questions and offering them the chance to give feedback at the end. The key is encouraging each player to think independently at speed.

"The Premier League is getting faster. Players have less time on the ball and need to be able to make decisions quickly, independent of the coach. The more we practise in that way, the faster we're able to make correct decisions under pressure - playing the right pass, hitting a shot."

Some 250 miles north in the Liverpool suburb of Woolton, UK Futsal pioneer and Brazilian Soccer Schools entrepreneur Simon Clifford has a new project, working on a one-on-one basis with a selection of the country's elite youth players.

His philosophy is based on the teaching of 200 core moves - dribbles and feints, shimmies and turns - performed with both feet, as he strives to create skilful players capable of beating opponents with a variety of tricks and flicks.

In 2002, the Football Association invited Clifford to Keele University, where he taught every Premier League academy how to coach Futsal, a game that remains popular in Brazil. It is played in a fast-paced five-a-side format on a small pitch with touchlines, hockey-sized goals and a heavy size-four football, with an emphasis on improvisation, creativity and ball control.

But it's another of his entrepreneurial sparks that could have the biggest impact on tomorrow's footballer. His Socatots scheme sees children between the ages of six months and five years taught basic movement and football skills in a pre-school type environment.

"The biggest change is that our players are completely two-footed," he says. "You have to have complete balance, which means you can beat players in any direction.

"At Chelsea, they start at under-eights and all bar one or two of their young players have come through Socatots. Our idea is to develop two-footedness and technique before you look at anything else."

The path of innovation leads to Southampton's Staplewood training complex, where for the last 12 years the club's psychologist and head of education, Malcolm Frame, has developed an emotional intelligence programme.

He aims to improve players' awareness of their emotions, how to control them and express them on the pitch. His mantra is a simple one.

At the start of every season he conducts several assessments. The first is a test in which each player answers questions about how they would feel and react in a variety of situations during a game. An assessment of their behaviour on the pitch and feedback from coaches are then combined to produce an overall score.

"We make an analysis of all that information and then sit down with each player and formulate a plan," Frame explains. "We have a set programme for players with anger problems - we're developing breathing techniques to help control that on the field."

But does it actually work? "Our research shows players with high levels of emotional intelligence are able to keep their emotions in check and deal effectively with the range of events they experience on the pitch," says Frame.

"We're massively impressed with our young midfielder James Ward-Prowse, his attitude and maturity. You look at Gareth Bale - he had a fantastic inner self confidence and drive. Adam Lallana - talk about someone who wasn't impulsive and didn't make rash decisions."

Saints youth products Ward-Prowse, Bale and Lallana have now made more than 600 appearances in all competitions and only Real Madrid's Bale has a red card to his name - a solitary dismissal for Tottenham in 2008.

Harnessing the power of the mind to influence athletic performance has been Sherylle Calder's mission since the mid-1990s. She's the worldwide leading expert in visual skills coaching and has pioneered a computer software programme called EyeGym.

Based in South Africa, she has won the backing of a host of top sportsmen, who have spoken of considerable advances in their reading of the game through use of software and on-field training.

Calder was part of Clive Woodward's staff when England won the rugby World Cup in 2003, before being hired by South Africa as they went on to lift the trophy four years later.

She has since designed bespoke programmes for an elite client list including four-time major-winning golfer Ernie Els, England's rugby World Cup-winning fly-half Jonny Wilkinson and wing Bryan Habana, who remains one of the stars of the game for South Africa.

After the Springboks' 2007 World Cup triumph, Habana thanked Calder "for making my eyes as fast as my feet", and even attributed their decline the following year to the decision not to retain her services.

One of her current students - Williams Formula 1 driver Valtteri Bottas - described seeing every turn he negotiated at July's German Grand Prix in slow motion, such is the speed of his eye-to-brain response after two years with Calder. He has training sessions throughout the week before using a specific drill on his tablet to prepare his eyes, brain, hands and feet prior to each race.

Since the start of last season, Calder has worked closely with a major European football club. They call her their secret weapon and have been so impressed with the results of her work that they asked her to sign a confidentiality agreement to keep their partnership a secret.

"They had a couple of players who did really well at the World Cup," she teases.

"We work on how you judge and see in your peripheral vision and how quickly your eyes move to pick up information, how you can see space. A great skill that's trainable through our programme is timing of runs and cheating the offside line.

"In rugby you receive the ball from one direction and we've made such a huge impact, so can you imagine what you can do in football, which is 360 degrees?" 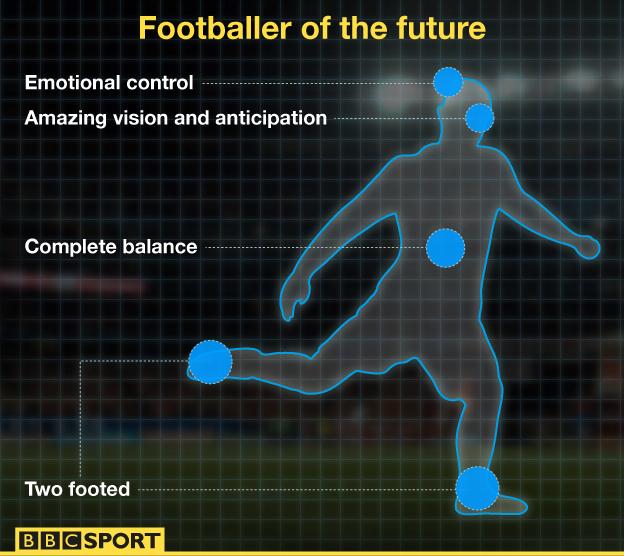 The question remains when and where tomorrow's footballer will emerge and what exactly they will look like. Simon Clifford believes the game already possesses two early prototypes.

"The footballer of tomorrow will need to be fast and have the athletic qualities to complete repeated sprints throughout the 90 minutes," he concludes.

"Intelligence is important, to put in the right individual work off the pitch and make decisions on it. Two-footed players will become a given.

"The front of the foot will be used more and more because of how quick the game is - look at some of Gareth Bale's and [Cristiano] Ronaldo's poked finishes. They are the closest to the player of the future."