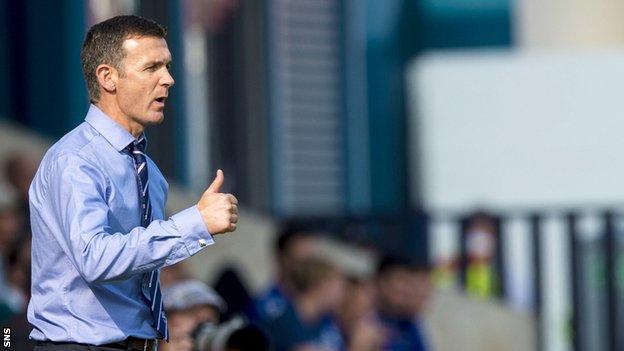 Manager Jim McIntyre is delighted with the backing he is getting from the Ross County board after adding three new faces to his squad.

And he could boost the County ranks further, with former Motherwell defender Paul Quinn currently on trial.

"The chairman has been fantastic and the board of directors have been great," McIntyre told BBC Scotland.

"I outlined what I think we need and what we need to do, and I've had 100% backing," added McIntyre, who replaced the sacked Derek Adams in September.

"When you come into a club you spend the first three or four weeks analysing where you think you need to improve, not just in the playing squad but behind the scenes.

"We're putting in a brand new gym and we want to try to improve the overall structure. The basic structure is in place but there are things I'd like improved upon and the chairman has given me fantastic backing."

Woods, 28, was recruited after being released by Barnsley, while Canadian international midfielder Dunfield, 32, was available after leaving Oldham.

And English full-back Reckord, 22, left Wolves in the summer following loan stints at Coventry, Plymouth and Swindon amongst others.

"We've chosen to add a couple of midfielders, which was a no-brainer considering Rocco Quinn faces an operation and Richard Britain will be not long after that," McIntyre explained.

Quinn is available after his contract at Doncaster was cancelled by mutual consent. The 29-year-old defender left Motherwell for Cardiff in 2009 for a fee of around £300,000.

"We're both having a look at each other," McIntyre said. "Paul is a player I know from playing against and he's got very good experience in the Championship - a quality player."

County welcome Celtic on Saturday and are awaiting international clearance to include their new faces in the squad.