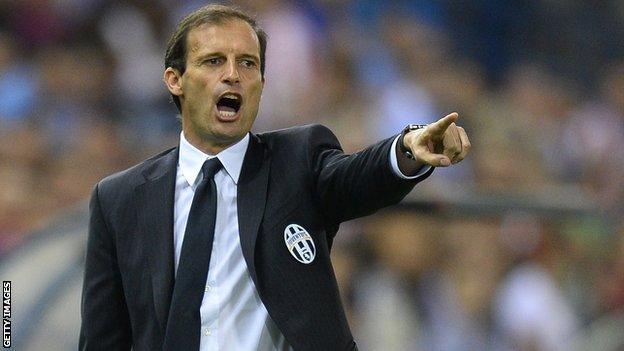 Juventus boss Massimiliano Allegri says he wants to manage in England one day and believes the Premier League is "more fascinating" than Serie A.

Allegri, 47, spent two months in London watching games after being dismissed by AC Milan in January.

"What particularly struck me was how good their infrastructures are and the huge enthusiasm that the crowd has," Allegri told BBC World Focus.

"I hope, in the future, to have the opportunity to coach in England."

Allegri, who has also coached Cagliari, steered AC Milan to the Serie A title in his first season in charge in 2010-11.

Milan finished second and third in following seasons but Allegri was sacked in January with the side 30 points behind leaders Juventus.

He was appointed by Juventus in the summer and goes into Saturday's game away to his former club Sassuolo with his side three points clear at the top of Serie A.

Allegri says he would relish the opportunity to take charge of a team in England before he retires from management.

"I was in London for two months when I was dismissed by AC Milan," he said.

"I saw some games to try and better understand English football.

"It's different from the Italian football, it's more fascinating."

Manchester United have been linked with a move for Juventus and Chile midfielder Arturo Vidal.

But Allegri says the 27-year-old is staying in Turin.

"The club has been very clear on Vidal," he added.

"This season Vidal is a Juventus player and I think there's no possibility that in January he'll go to Manchester."