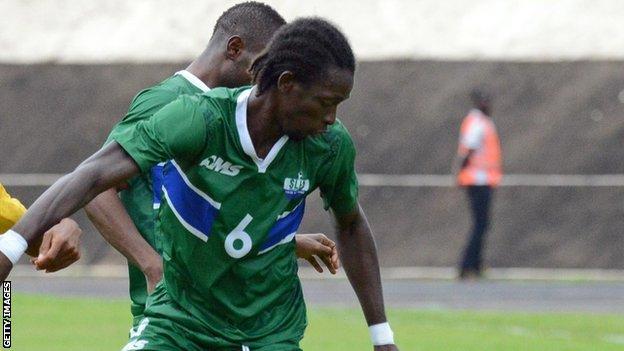 Greek club PAS Lamia have asked Sierra Leone's John Kamara not to train or play with the club for three weeks due to fears over the Ebola virus.

Kamara returned to Greece after playing for the Leone Stars in their Africa Cup of Nations ties in Cameroon.

Lamia told him the decision was on advice from the Greek health ministry.

"[The club told me] I shouldn't be with the team for 15 to 21 days as I went to Africa to play and because of the Ebola virus," Kamara told BBC Sport.

"They made it clear I should stay indoors or I should travel abroad to see my family and not go to training."

Sierra Leone had to host their tie against Cameroon in Yaounde because they are banned from playing at home by the Confederation of African Football due the outbreak of the Ebola virus in the country.

The move by second tier Lamia comes despite the fact there have been no reported cases of Ebola in Cameroon and Kamara has not been to Sierra Leone in more than a year.

"The last time I was in Sierra Leone was for the World Cup qualifiers against Tunisia and Cape Verde," he added.

"[While we were in Cameroon] they checked our temperatures every morning and every evening.

"I have told the club I am ready to undergo any medical they want me to do - as far as I am concerned I don't have the Ebola virus.

"I don't understand it but I have to respect their decision."

The 26-year-old added he would have to think about his future with the club.

"I can't say anything about my future right now because I have so many things to think about, I have to speak to my family and my agent about it before I consider what to do," he said.

Kamara played in both Nations Cup qualifiers for Sierra Leone in Cameroon, the Leone Stars earned a goalless draw on Saturday before losing 2-0 four days later.

The BBC has contacted the second tier Greek club but no one has was available for comment.