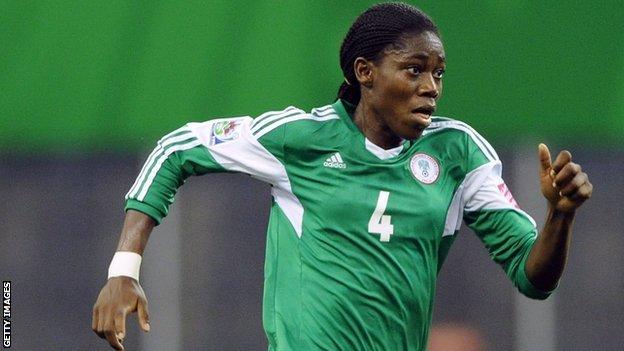 Nigeria broke local hearts on Friday with a 2-0 win over Namibia in the final round of group A matches in Windhoek which denied the hosts a place in the semi-finals of the 2014 African Women's Championship.

Nigeria ended as group winners with Ivory Coast also progressing to the last four despite drawing 1-1 with Zambia.

Nigeria finished on nine points, five points above Ivory Coast. Namibia were a further point back with Zambia bottom of the group with just one point.

Nigeria clinched their victory over Namibia through first half goals from defender Gloria Ofoegbu and striker Francisca Ordega.

Despite some rapturous support from the home fans, Namibia failed to claw their way back into the match, and had to work hard towards the end to prevent an even bigger defeat.

The other Group A match was an equally tense affair as Ivory Coast held on to draw 1-1 with Zambia and clinch the all important point which took them into the semi-finals.

Ivory Coast skipper Estelle Nahi gave them the lead after just two minutes. But Zambia ensured it would be an uncomfortable finish for Ivory Coast, as Susan Banda equalised on 58 minutes.

Nigeria will face the runners-up in Group B in the last four whilst Ivory Coast will take on the Group B winners.