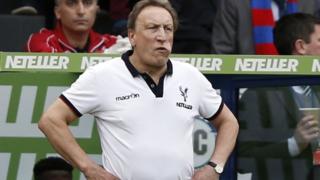 Ref had one of those days - Warnock

Oscar opened the scoring for the visitors, before both teams were reduced to ten-men after Cesar Azpilicueta and Damien Delaney were dismissed.

Fraizer Campbell scored a late consolation goal for Palace, but the defeat leaves them one point above the relegation zone.