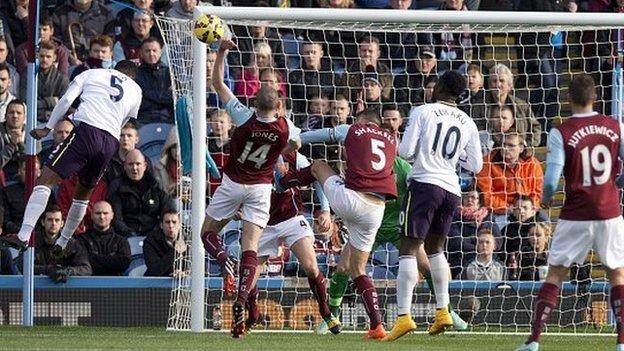 Samuel Eto'o scored twice as Everton climbed into the top half of the Premier League to leave joint-bottom Burnley still without a league win.

Eto'o's powerful early header was cancelled out by Danny Ings when he capitalised on a Romelu Lukaku mistake to convert Lukas Jutkiewicz's pass.

Yet Lukaku soon made amends when his scuffed shot found the left corner.

Eto'o then made the points certain with a superbly curled shot before being denied a hat-trick by the post.

It was the ideal end to an encouraging week for Toffees manager Roberto Martinez as his team finally begin to build some momentum following last weekend's 3-0 victory over Aston Villa and a battling 0-0 Europa League draw in Lille.

The Clarets' problems continue to mount, meanwhile, and they will go bottom on Monday if QPR avoid defeat by Aston Villa.

While Sean Dyche's team could not be faulted for industry, they struggled to break down a Toffees side who never had to find top gear.

The visitors showed no signs of being affected by their busy schedule, beginning purposefully at Turf Moor, with a sweeping move that culminated in a cross from the overlapping Leighton Baines being emphatically headed home by Cameroonian veteran Eto'o.

But the Clarets showed their fighting spirit by responding within 14 minutes as Jutkiewicz cut out a sloppy Lukaku pass back towards his defence before threading the ball to Ings, who rounded goalkeeper Tim Howard and slotted in.

Lukaku soon atoned, however, when he finished off another flowing Toffees move which saw them string together 24 passes.

Naismith then almost doubled the visitors' advantage before the interval with a looping header against the crossbar from Leon Osman's cross.

But the visitors made the points certain when substitute Steven Pienaar fed Eto'o, who bent a brilliant shot inside the right post from 22 yards.

Ings and Naismith threatened at either end before Eto'o, with the angle tight after rounding Heaton, agonisingly missed out on a third when his effort clipped the inside of the post and dribbled across the goalline.

Everton manager Roberto Martinez: "We knew we had to be professional and really concentrate. Burnley play with a lot of energy and pressure but we dealt with it and I thought we took our goals with real class.

"We worked really hard for 12 months to earn the right to be in the Europa League. The squad is big enough to deal with [playing lots of games] and I am really pleased with that.

"What Samuel Eto'o brings is incredible experience but with that is also a great hunger. He is a terrific example to have him around. He is a clinical finisher. He knows how to hurt back fours. He first touch is with the thought of what he is going to do next."

Burnley manager Sean Dyche: "Generally I thought we performed well but they are a very high quality side with highly clinical players and they showed that. That is where our growth needs to come - the clinical edge.

"We have to fight beyond our means at times but we have to build a team that can win games. That is the challenge. The margins are tight, we know that and we have to find a way of turning the margins in our favour. We never came into this thinking it would easy."