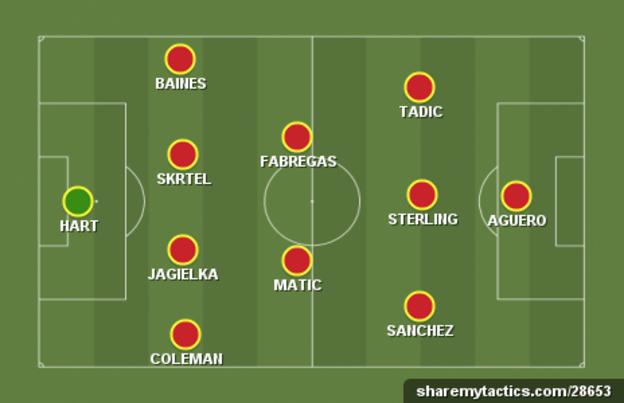 Who can stop Chelsea? Jose Mourinho's side won 2-1 at Crystal Palace to maintain their five-point lead at the top of the Premier League.

Elsewhere, Liverpool won 3-2 in a thrilling finale at QPR, there were victories for West Ham, Stoke, Everton and Newcastle and Danny Welbeck grabbed an injury-time equaliser for Arsenal against Hull City.

Here is my Team of the Week selection.

In a game of saved and missed penalties Joe Hart came out on top. His goalkeeping counterpart Hugo Lloris was not bad either and perhaps with defenders capable of defending, the Frenchman might have made my Team of the Week instead.

Ryan Mason should have put Spurs ahead in the opening minutes and Christian Eriksen and Roberto Soldado could also have scored past the City goalkeeper.

Instead, England's number one produced an excellent display and sent Tottenham home with no points and a lot to think about.

There can only be a handful of full-backs who are capable of regularly scoring goals in open play and Seamus Coleman is one of them. It never ceases to amaze me the desire Coleman has to get forward and wherever possible in the opposition penalty area to try to get on the scoresheet.

Martin Skrtel saved Liverpool's skin twice in a fixture where both teams struggled to defend at times. He kept them in the game in the first half having kicked the ball off the line and stopping it from ending up in the net.

He then saved his team for a second time to stop them going two down with another amazing clearance as Liverpool looked to be losing their grip on the game. Thanks to Skrtel Liverpool went on to beat QPR and leave them anchored to the foot of the table in an extraordinary game of football.

Jagielka scored a scorcher against Liverpool a few weeks ago and now appears to be getting a thirst for goals. The way he attacked Leighton Baines's cross for Everton's opener against Aston Villa was immense. He left Aly Cissokho sprawled on the deck in his determination to score the goal. Now that's how you attack a ball.

It looks like Leighton Baines is on top of his game again after a quiet World Cup with England and an even quieter start to the Premier League season.

He put in some wonderful work on the right-hand side before producing a wonderful cross with his weaker foot for Jagielka to score. Not content with that, he then did precisely the same for Seamus Coleman late in the game to seal Villa's fate.

Since Nemanja Matic's return to Stamford Bridge he has not grabbed all the headlines but he has been a most effective silent force. The freedom and support he gives Cesc Fabregas, Eden Hazard and Oscar is immense. Mourinho need not worry about any defensive frailties with him in the side.

A contender for the player of the season so far must be Cesc Fabregas. Ever since his arrival from Barcelona the former Gunner has been at the heart of Chelsea's renaissance. He started and finished a most exquisite move involving Hazard and Oscar which even had Mourinho purring.

Dusan Tadic had an excellent game against a Sunderland side that fell apart in the second half. I cannot remember when I have seen an away side perform so badly. Just to complete Vito Mannone's goalkeeping nightmare Tadic scored Southampton's sixth, set up their seventh for Victor Wanyama and was a menace against the Black Cats all afternoon.

I sat and watched this young man terrorise QPR all afternoon in a match where you could not predict what was going to happen next.

The only consistent feature in this game was the superb performance of the England midfielder. I was delighted to hear Brendan Rodgers insist in his post-match press conference that his relationship with England manager Roy Hodgson is fine.

It is just as well because if this kid plays likes this every week both Liverpool and England need to give him all the rest he wants.

Alexis Sanchez is starting to look like the real deal. His opening goal for Arsenal was a superb individual effort and he also had a header superbly saved by Hull keeper Eldin Jakupovic.

He also had a chance to shoot, and probably should have done, but instead passed to Danny Welbeck, who got the equaliser. A mark of a top player.

This fixture promised plenty of goals and Sergio Aguero did not disappoint. Already another early candidate for player of the season, his movement away from the ball against Spurs was sensational and the feature of the match.

The Argentine scored two penalties, missed another before completing his hat-trick and then added another just for good measure. He could have had seven goals in the end.