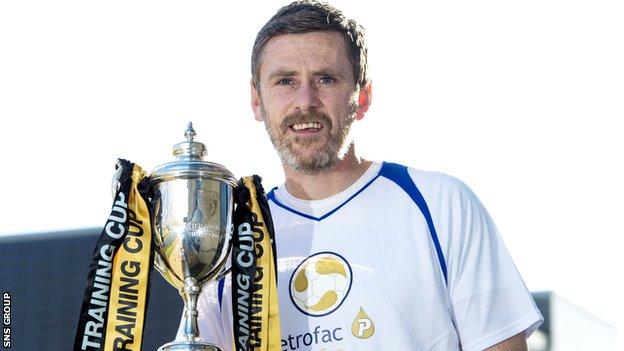 Alloa await the winners, with Livingston already in the final.

"All I can ask is for my players to give me 100% and, if Rangers have an off night, we might create a little bit of history," said Naismith.

"Shocks happen every now and then. When I was at Everton we lost to Shrewsbury in the FA Cup."

East Fife lost four matches against the Ibrox side in League One last season and have not beaten Rangers since 1974. The last home success came in 1956.

"We need to carry a threat going forward, as well as containing them," Naysmith, 35, told BBC Scotland.

"We didn't manage to score in four games against them last season.

"It's only my 40th game in charge and it's a third game against Rangers. These are the kind of games I want to be involved in regularly. My message to the players is to embrace it, enjoy the excitement that it brings.

"For the players it would a result they could live on. Whatever else they achieve, it would go a long way top that."

East Fife are fifth in League Two following Saturday's 1-1 home draw with Annan, while Rangers warmed up with a 6-1 demolition of Raith Rovers in the Championship.

"It will be very difficult," added Naismith, who won 46 caps for Scotland. "Rangers are a really good team, with a good set of players.

"I know a lot of them personally from having played with them at international level and against them."

Naysmith is ruled out with a knee injury and is joined on the sidelines by Scott Smith and Alan Cook, while Kevin Smith is a major doubt. on-loan pair Liam Smith and Jonathan Page are cup-tied.

"We are down to 14 or 15 bodies and Rangers are starting to come into a bit of form," explained the former Hearts and Everton left-back.

"But I know that the players will give us everything to get a result."