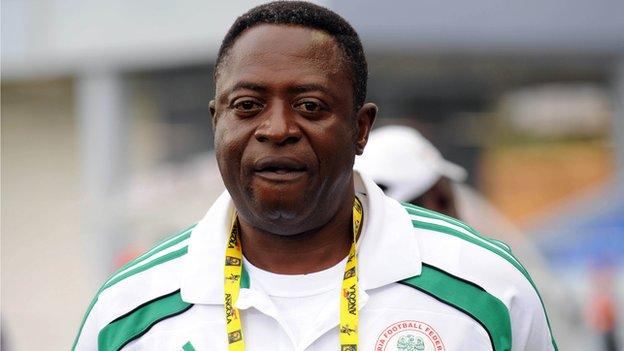 Nigeria caretaker coach Shaibu Amodu is aiming to turn around the fortunes of the Super Eagles in the 2015 Africa Cup of Nations qualifiers.

The African champions are third in Group A with just four points.

"We have been given an assignment that is tough and very challenging, but not one that is impossible to accomplish," said Amodu.

"We will give it our very best and see how things can be turned around."

The 56-year-old returns to the helm for a fifth time and his first match will be a tricky trip to second-placed Congo on 15 November.

The Congolese caused the shock of the opening round with a 3-2 win in Nigeria.

The Super Eagles then followed that with an away draw in South Africa and a shock defeat in Sudan, before getting their only win so far over the Sudanese in Abuja.

But Amodu is used to such situations. He replaced Dutchman Jo Bonfrere in 2001 when Nigeria were trailing group leaders Liberia and struggling to qualify for the 2002 World Cup.

He led Nigeria to wins over Liberia, Sudan and Ghana in their final three group matches to grab a place in Japan and South Korea.

"I think this situation is very similar to what we had in the qualifiers to the 2002 World Cup. We worked hard, did our bit and were fortunate to have results elsewhere also go our way," he recalled.

Let us all be modest in our expectations so that we do not put ourselves under undue pressure.

"There are certain things we cannot control as humans, just as there a lot more we can influence.

"I can assure everybody that we will give this assignment all we have and then hope that all other things fall in place for us."

Despite the turnaround Amodu lost his job before the 2002 global tournament despite Nigeria finishing third at the 2002 Nations Cup in Mali.

He was also in charge when Nigeria qualified for the 2010 World Cup in South Africa but again Amodu was sacked before the finals.

His dismissal came after another third-place finish in the Nations Cup, this time at the 2010 finals in Angola.

But the highly-experienced Amodu has called for calmness ahead of next month's crucial qualifiers.

He said: "Let us all be modest in our expectations so that we do not put ourselves under undue pressure.

"Let everybody involved in the game in Nigeria pull together in the right direction and then we see what we can achieve with the next two games."

Nigeria are currently three points behind Congo, who occupy the second automatic qualification spot in Group A.