"All eyes turned and all mouths gawped to see this pizza slip off that famous puce face and roll down his nice black suit."

The excerpt from Ashley Cole's autobiography may sound like a tale from a school dinner hall.

In fact, it is a snapshot from the farcical scenes in the Old Trafford tunnel that followed Manchester United's tempestuous 2-0 victory over Arsenal on 24 October 2004, a result that ended the Gunners' 49-match unbeaten run.

As players and officials from both sides clashed in the tunnel, United manager Alex Ferguson was struck by a slice of pizza thrown by an Arsenal player, later alleged to be Cesc Fabregas.

Further details of the so-called "Battle of the Buffet" have always been sketchy, with some tabloids claiming at the time that soup and sandwiches were among the edible projectiles deployed by rival players.

With the help of testimonies from managers and players on both sides, and fresh insight from Phil Neville, who was at the heart of United's midfield on the day, BBC Sport revisits "Pizzagate", 10 years on. 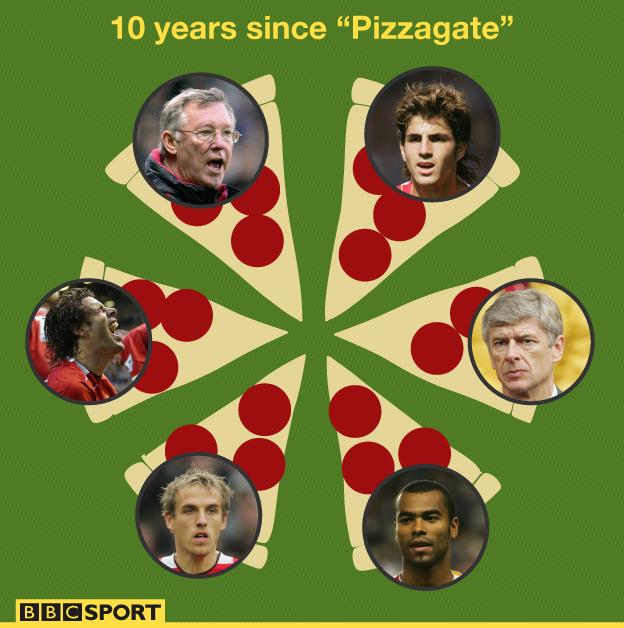 The build-up - 'the tension was incredible'

For a few years either side of the millennium, Arsenal's rivalry with Manchester United was the fiercest in English football. Between them, they won nine successive Premier League titles, with each meeting of Ferguson and Arsene Wenger's men more hostile than the last.

Their October 2004 showdown was dubbed the Battle Of Old Trafford Mark II, in reference to the events of the previous season when Arsenal's aggressive reaction to Ruud van Nistelrooy's last-minute penalty miss led to a spate of suspensions and fines.

"They got away with murder," Ferguson insisted prior to the re-match. "What the Arsenal players did was the worst I have witnessed in sport."

Wenger's response? "Maybe it would be better if you have us put up against a wall and shot us all. I hope that he will calm down."

United striker Wayne Rooney: "All week Arsenal had been banging on about how great it would be to make it to 50 games unbeaten at Old Trafford. Big mistake. They fired us up. Fifty games unbeaten? No way. Not at our place."

Phil Neville: "It was a build-up of 12 months because the happenings in the 2003 game were totally out of order with people jumping all over Ruud. But in every game we played back then the tension in the air was incredible. It was just so ferocious. It wasn't war, but it was like two heavyweights clashing in a ring. Nobody used to give an inch."

The match - 'the hardest I have played'

Just like its Old Trafford predecessor, the match was a physical, feisty encounter that hinged on several controversial incidents.

In the 73rd minute, Riley awarded a controversial spot-kick at the other end when Rooney went down under Sol Campbell's challenge. Van Nistelrooy stepped up to exorcise the demons of the previous year before Rooney sealed the points with a late tap-in on his 19th birthday.

Neville: "We knew how to beat Arsenal. We knew how to ruffle them and rile them. We got into Reyes, as well as [Thierry] Henry and [Robert] Pires. We knew if we got into their flair players, the players who made them tick, we could go on to win the game with the quality that we had."

Reyes: "In all my sporting life, I have never received so many kicks as I did in Manchester. It was the hardest match I have played."

Wenger: "Riley decided the game, like we know he can do at Old Trafford. We were robbed. There was no contact at all for the penalty, even Rooney said so. We can only master our own performance and not the referee's performance.

"We all know him [Van Nistelrooy], he can only cheat people who don't know him."

The buffet - 'the slap echoed down the tunnel'

The exact trigger for the fracas that erupted in the tunnel remains unknown, but most accounts suggest it was sparked by a confrontation between Van Nistelrooy and an irate Wenger.

Ferguson: "Ruud van Nistelrooy came in to the dressing room and complained that Wenger had been giving him stick as he left the pitch. Right away I rushed out to say to Arsene: 'You leave my players alone.' He was incensed at losing the game. That was the reason for his combative behaviour. 'You should attend to your own players', I told him. He was livid. His fists were clenched. I was in control, I knew it."

Cole: "By the time we were walking down the extendable plastic tunnel everyone was having a go at each other. There were shouts of 'you cheats' and players were running into a jostling huddle where the narrow tunnel opens into a wider mouth. I was jammed in the middle. I heard the boss [Wenger] hammering Ferguson; incandescent French, verbally sparring with the bullish Scotsman."

Neville: "I was in the dressing-room and I just heard this kerfuffle outside. Arsenal were on the left, we were on the right. The goalkeepers were right at the front, but it was only handbags."

Ferguson: "The next thing I knew I had pizza all over me. We put food into the away dressing room after every game. Pizza, chicken. Most clubs do it. Arsenal's food was the best. They say it was Cesc Fabregas who threw the pizza at me but to this day, I have no idea who the culprit was."

Cole: "This slice of pizza came flying over my head and hit Fergie straight in the mush. The slap echoed down the tunnel and everything stopped - the fighting, the yelling, everything. All eyes turned and all mouths gawped to see this pizza slip off that famous puce face and roll down his nice black suit.

"I thought Ferguson was going to explode but then he stormed off into the dressing room cursing and grunting, brushing the crumbs and stains off his collar. We all went back into the dressing room and fell about laughing. All I can say is that the culprit wasn't English or French, so that should narrow it down." 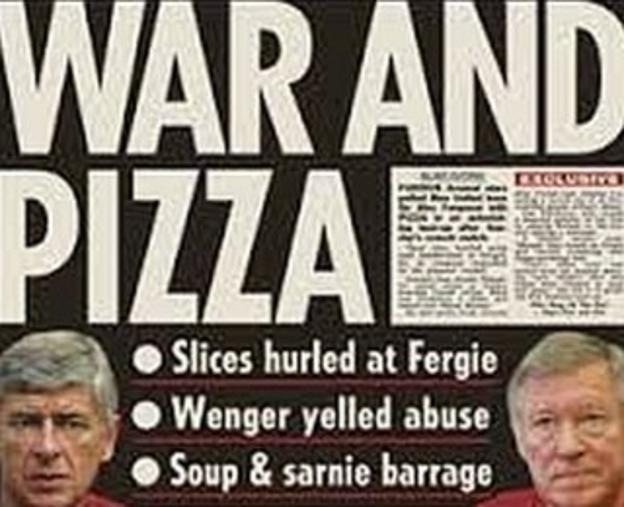 Neville: "Sir Alex came into the dressing-room with food on his blazer. Why throw a pizza? Man to man you don't throw pizzas, you throw punches. They were probably more worked up than we were.

"I don't think the pizza was directed at Sir Alex. The tunnel was only a metre or so wide so if you have 22 players in a small tunnel you are bound to hit someone."

United captain Roy Keane, who missed the game because of an illness brought on by a detox diet: "I was gutted that I missed the game, and all the fighting that went on in the tunnel afterwards. I couldn't even go to the game. There was pizza being flung around in the tunnel, but I wouldn't have eaten it, it wasn't healthy enough for me."

The aftermath - 'it created a division between us'

As rumours of the pizza-throwing got out, the tabloids had a field day, with some painting a picture reminiscent of the food-fight finale to the film Bugsy Malone.

Van Nistelrooy was given a three-match ban for his challenge on Cole, while Wenger was fined £15,000 for accusing the Dutch striker of cheating. Both teams were summoned to a meeting with the Football Association to "to avoid any repeat of the adverse publicity that surrounded the game."

As Jose Mourinho's Chelsea scooped the title, Arsenal beat United on penalties to win the FA Cup, with Reyes becoming only the second player to be sent off in an FA Cup final.

By then, Pizzagate had left Ferguson's relationship with Wenger at an all-time low.

"That day created a division between us, without doubt, and that rift extended to [Wenger's assistant] Pat Rice, who stopped coming in for a drink after game," Ferguson wrote.

"The wound was not fully healed until the Champions League semi-final in 2009, when Arsene invited us into his room after the game and congratulated us. When we played them at Old Trafford a few weeks later, Arsene came in with Pat, just for a few minutes."

Seven years later, in a BBC Radio 5 live phone-in, former Arsenal defender Martin Keown identified Fabregas, who returns to Old Trafford this Sunday in Chelsea colours, as the player who threw the pizza at Ferguson.

"The press lapped up Pizzagate because it was adding fuel to the fire of this monster that was Arsenal v Manchester United at the time," recalled Neville.

"It was probably quite a funny moment looking back on it. It's another tale in the history of the matches between the two clubs. Allegedly it was Cesc Fabregas, but it's something you laugh about now."