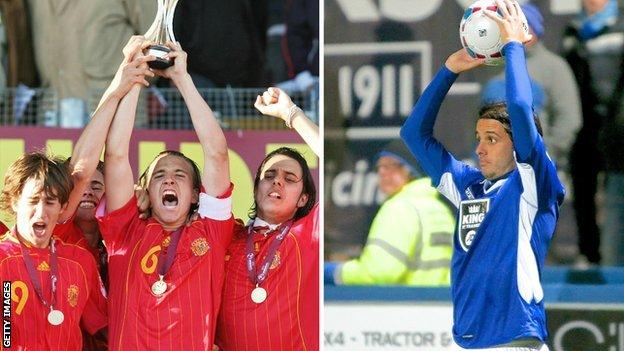 Seven years ago David Gonzalez was a European Under-17 champion and World Cup runner-up, playing alongside the likes of Manchester United goalkeeper David De Gea and Stoke's Bojan Krkic.

Now he plays in the fifth tier of English football for Macclesfield Town and will be in the thick of the action when Macc play Wrexham in Friday's FA Cup fourth qualifying round.

It is a far cry from Barcelona's famed La Masia academy, which the Spaniard joined as a 14-year-old.

He was released by Barca in 2008 and Gonzalez's career has taken him to Malaga, Cadiz and Real Oviedo. Last season he played for Caudal in the Spanish third tier but his time there was hampered by injury.

Perhaps not surprisingly, the midfielder did not imagine that some 10 years later he would be at a humble Cheshire club, where no player earns more than £500 per week and the team's entire budget is less than Wayne Rooney's weekly wage.

In fact, 24 year-old Gonzalez admitted to BBC World Service he had never heard of Macclesfield until signing for the Silkmen in July after impressing during a two-week trial.

"In Spain I listen and talk about Manchester United, Manchester City and Arsenal - the famous clubs in England. I only heard of Macclesfield when I came here," said Gonzalez.

Currently separated by an entire 92 league places in the English football pyramid, Manchester United and Macclesfield Town have few things in common.

But Gonzalez has a personal connection to the Red Devils, in particular De Gea.

The two Davids played alongside goalscorer Stoke City's Bojan in the Spanish youth outfit that won the Uefa Under-17 European Championships in 2007, beating an England side featuring a young Danny Welbeck 1-0 in the final.

The youngsters came close to doubling their success three months later, but were beaten on penalties by Nigeria in the World Cup final after failing to score a single spot-kick.

Gonzalez remains closer to Bojan than De Gea and has been out for a few meals with the Stoke player in Alderley Edge.

His current footballing landscape sees him plying his trade against the likes of Altrincham and Welling United.

Alongside Barnet's Luisma Villa and Southport's loanee goalkeeper David Raya, Gonzalez is one of only three Spaniards playing in the Conference.

And, despite Football Association chairman Greg Dyke calling for only the best of foreign talent coming to England's top flight, he is confident others will follow him to the lower leagues.

"At Barcelona you receive a special education. As a kid you play the same style as the first team and they teach you to play good football and to make good players for the future," he added.

"However, a lot of Spanish players want to come here to play English football. It is very different football but very good and I am learning a lot in Macclesfield and playing this way."

Gonzalez has enjoyed victories over both of his Spanish counterparts this season as he contributed to Macclesfield's victories over Southport and Barnet.

His agent, Errol Davis sees this "footballing education" as an opportunity for David to work his way up the English leagues.

"That's why players like David come - in the hope that they show they're far better than all of the other players in the Conference," said Davis.

"They have more chance of being spotted. For somebody like David, a club like Macclesfield is perfect at this level rather than going higher straight away."

"The attraction is to do well and get playing in the Football League. They know what rewards are on offer here but the style of football is totally different," said the Town boss.

Despite the language barrier and off-field issues, Gonzalez has also overcome difficulties and differences on the pitch by earning himself a regular place in the Silkmen's starting line-up, while a section of fans have taken to calling him the non-league Messi.

"We're a side who try to play but what we've encountered this season is that the majority of the teams are very big and get the ball from the back to the front as quickly as possible," added Askey.

"David's probably in the air far more than before which is the main difference. It's very physical. We played a side the other day with just one player under six foot so it's a complete culture shock."

Having played with the likes of Bojan and De Gea, it is only natural for Gonzalez to dream of playing in the Premier League alongside his friends and former team-mates.

"Hopefully, but I think that it is very complicated. I hope that it will be a reality one day," laughs Gonzalez.

Considering the FA Cup is the only competition to allow Conference teams to play against those in the higher tiers, David will be especially hopeful of a result against Wrexham on Friday.

Qualifying for the FA Cup first round proper would be a big step towards an unlikely reunion between the old amigos.

Listen to BBC World Service's 'A Tale of Two Davids.'