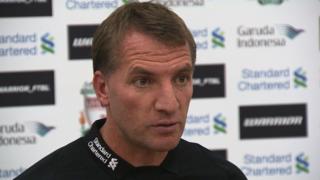 Liverpool manager Brendan Rodgers says that striker Mario Balotelli "is genuinely trying very hard" despite criticism for his performance in their 3-0 defeat against Real Madrid.

The Italian has scored one goal in 10 games for the club so far, and the sight of him swapping shirts with Real defender Pepe as the teams went off at half-time was not well received by some home fans.

Rodgers insists he will stick with him but was uncertain about his long-term future, saying: "As long as he's doing his best that's all I can ask for. Whether his best will be good enough remains to be seen".