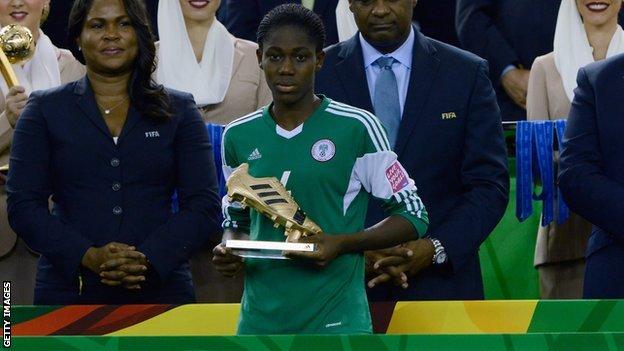 Nigeria striker Asisat Oshoala wants to win Saturday's African Women's Championship to make up for losing the final of the Under-20 Women's World Cup.

The 21-year-old was the top scorer at August's tournament in Canada but tasted defeat to Germany in the final.

Now she has a chance to help ease the pain of that loss by helping the Super Falcons beat Cameroon at Namibia's Sam Nujoma Stadium.

"Getting to a final for the second time this year - and winning the trophy - would be something cool for me," Oshoala told BBC sport.

By reaching the final both teams have already qualified for the senior Women's World Cup in Canada next year, but Oshoala says Nigeria want to go there as continental champions.

Africa will have a third team at the tournament - the winner of the third-place play-off between Ivory Coast and South Africa will also earn a spot - and Oshoala expects the representatives to do the continent proud.

"[Africa has] really improved its game and Fifa giving us three slots instead of two slots I think it's a good thing for us," she said.

"I would like to go there to prove ourselves and to justify that the three slots given to us won't be a waste."

Nigeria have no injury concerns ahead of the final and they are favourites to beat Cameroon.

But the Indomitable Lionesses have a strong and experienced squad available. The core of the team is that which won the All Africa Games title in 2011 in Maputo and subsequently went to the 2012 Olympic Games in London.