Sports need to engage "in the battle for gender balance and fairness", says UK Minister for Sport Helen Grant after a BBC Sport study into prize money found 30% of sports reward men more highly than women.

The biggest disparities in prize money were found in football, cricket, golf, darts, snooker and squash.

"There is a gap, it needs to be closed but it's not going to happen overnight. We do know that women's sport is very exciting, we know it can draw really big audiences but we need more media coverage and more commercial investment," Grant told BBC Sport.

"It's not just about the bottom line and profits and the return on investment which I believe they will get, it's also taking part in the battle for gender balance and fairness in the 21st century."

A total of 56 global sports were looked at in the extensive study. Out of 35 sports that pay prize money, 25 pay equally and 10 do not. Fourteen sports, including rugby union and hockey, do not pay any prize money at all. Five sports did not provide information for the investigation and men and women compete alongside each other in horse racing and equestrian.

Athletics, bowls, skating, marathons, shooting, tennis and volleyball have all paid equal prize money since before 2004.

In the past decade, nine more sports have starting doing so with five - diving, sailing, taekwondo, windsurfing and some cycling events - achieving equality in the past couple of years. 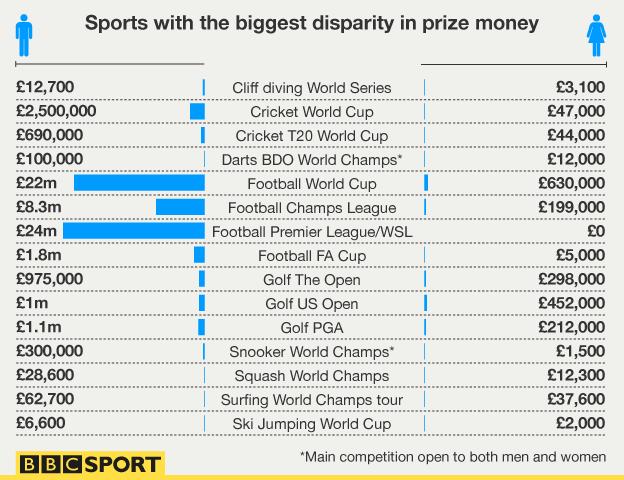 Grant was encouraged by the number of sports which do pay equal prize money adding: "In 70% of sports there is parity and that's great and that's what we want. But we also want the others moving in that direction too and I feel it will happen when the full potential of women's sport is seen and realised."

Female footballers are rewarded significantly less than their male counterparts.

For winning this year's World Cup in Brazil, Germany received more than £21m more than Japan's women did after they were crowned world champions in 2011.

This season's men's FA Cup winners, a competition watched in more than 120 countries, will secure £1.8m in prize money while the team who lift the Women's Cup will net £5,000 - the same amount as the winning semi-finalists of non-league competition the FA Vase.

The Football Association has said men's and women's football are incomparable, describing them as "polar opposites" in global reach.

Kelly Simmons, the FA's director of the national game and women's football, said: "The men's game is a huge multi-million pound industry so when you compare it to the women's game, which until three or four years ago was played by amateurs, the gulf is enormous.

"We are investing £12m in women's football this year but we want to direct that investment where we think it will have the biggest impact and at the moment we do not think that is in prize funds.

"However, we are reviewing it and are looking for a commercial partner to take the women's FA Cup to bigger audiences."

Women golfers can earn a handsome living on the LPGA Tour, with Michelle Wie taking home £452,000 this year for winning the women's US Open.

But the American's reward was considerably less than the £1m cheque received by 2014 US Open winner Martin Kaymer.

Ivan Peter Khodabakhsh, chief executive of the Ladies European Tour, said he was striving for parity in prize money.

"The current significant difference in the prize money between men's and women's golf cannot be justified, taking into consideration the competitiveness and quality of professional women's golf worldwide," he told BBC Sport.

But Khodabakhsh added that achieving equality in prize money would require "considerable effort" from governing bodies, corporations and the media.

But for winning her world title, she received £16,300 less than the men's world champion Nick Matthew, who secured £28,600 when he won his third world crown in November 2013.

"The tours are committed to equal prize money and, indeed, this was reinforced at the recent World Squash Federation conference," Shelley told BBC Sport.In this year's World Twenty20, Australia beat England in the women's final - and were paid £44,000 in prize money - just hours before Sri Lanka's men overcame India by six wickets for which they were rewarded £690,000.

The International Cricket Council told BBC Sport: "We take a more holistic approach to make sure the overall women's game will grow. There's been a 12-fold increase in funding over the last five years where we now invest $25m (£15.5m) in the women's game, compared with $2m (£1.2m) in the previous five years.

"That money will be spent on development, associate members and pumped back into the game. Everything is increasing, such as participation and media coverage. Who knows where the sport will be in 20 years' time? It's heading in the right direction."

Tennis was the first sport to pay equal prize money when the US Open started doing so in 1973 after campaigning from Billie Jean King and eight other female tennis players.

Stacey Allaster, chief executive of the Women's Tennis Association, said: "The WTA is where we are today because we had strong leaders, like Billie Jean King, who advocated for equality and she got it done in 1973 at the US Open. It was Venus Williams who got us over the line with Wimbledon [getting equal pay in 2007].

"It's that combination of the athletes advocating for what's right, and then the administrators supporting them, creating the public awareness that more equality, and eradicating gender bias in sport, needs to happen."

In snooker and darts, women are allowed to enter and compete alongside men at world championships, provided they qualify. However they do also run separate women's championships, with the British Darts Organisation paying out £12,000 for the women's title and in snooker, Reanne Evans received £1,500 for winning the women's event this year.

The study, which looked at prize money only and does not include wages, bonuses or sponsorship, was commissioned before a conference on Thursday aimed at transforming sport for the benefit of females in the United Kingdom.

It is being delivered by the Department for Culture, Media and Sport and the Women's Sport and Fitness Foundation (WSFF), which is celebrating its 30th anniversary.

Ruth Holdaway, chief executive of WSFF, said: "We are encouraged that since 2013 a number of sports have taken the positive step towards prize money parity, and this shows that the momentum currently building behind women's sport is having an impact.

"It is, however, disappointing that in 2014 women still find themselves having to battle for equal reward in elite sport."