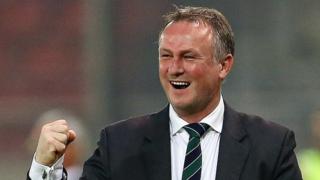 Northern Ireland manager Michael O'Neill says there is a positive mood in the squad after an excellent start to the Euro 2016 qualifying campaign.

O'Neill's men, who are top of their group after wins over Hungary, the Faroe Islands and Greece, play Romania away in their next game on 14 November.

Derby striker Jamie Ward is a doubt for the game with a thigh injury but the team boss has not ruled him out of the trip to Bucharest.