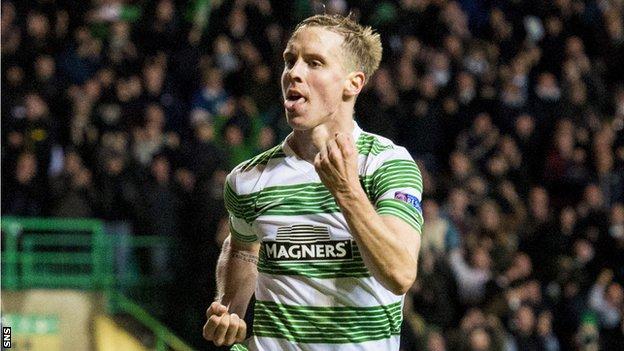 Celtic midfielder Stefan Johansen believes there is more to come from Ronny Deila's side, despite a nervy 2-1 Europa League win against Astra.

Goals from Johansen and Stefan Scepovic in the final stages were almost undone when Gabriel Enache quickly reduced the deficit in the 81st minute.

"We knew we needed to get the tempo up to get them tired and be patient and, in the end, the chances would come.

The win put Celtic joint top of Group D on seven points, level with Salzberg, but Johansen felt Deila's men put themselves under pressure late in the game and gave the Romanians too many chances to reply.

It was a bit of pressure in the end, but football is about winning and we won the game

"In the end, they did and we should have killed the game at 2-0 up, but they got an unnecessary goal," said Johansen.

"So it was a bit of pressure in the end, but football is about winning and we won the game.

"We've got seven points out of a possible nine, so it is a very good start for us.

"To be fair, it wasn't our best game today, but we won and that's what matters.

Johansen also set aside praise for his namesake Skepovic who put Celtic into the lead with a 73rd-minute header, finally getting on the scoresheet after signing for the Scottish champions in the summer transfer window.

"He hasn't played a lot and hasn't been in the starting 11," said Johansen, "But he works very hard every day at training and is a quality player, so it is well deserved that he got this goal.

"He's a threatening player up there, he's good in the air and strong, so I am happy for him and I think everybody else is the same."