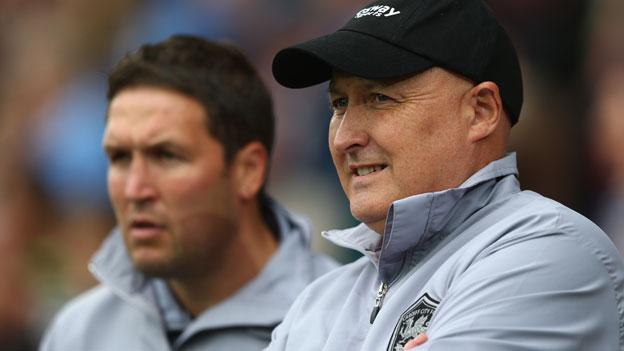 Cardiff City manager Russell Slade says he is "fully behind" the idea of retrospective punishment for diving.

His comments come after Swansea City boss Garry Monk accused Stoke City's Victor Moses of cheating to gain a penalty in the 2-1 win over Swansea.

"To go back through a DVD and for a referee to then say: 'Well it was a dive, shall we take action?', then I'm fully behind that," he said.

The former Leyton Orient manager conceded it might be difficult for referees to spot a dive "in the heat of the moment" but the opportunity should exist to review incidents after matches.

Slade, who took over at Cardiff City in October after more than four years at Leyton Orient, also feels the problem is less prevalent in the lower divisions.

"Is there more of it [diving]? Yes of course there's more of it, [but] maybe not so much in the lower leagues if I'm honest.

"It's probably highlighted more in the Premier League... than it's ever been in the past.

"I just feel there's a big honesty in the lower leagues...

"...As a manager sometimes it's frustrating because you think it's a penalty and the player's stayed on his feet and you say: 'What are you doing, just get yourself down'.

"I just think that exists there [in lower leagues] a little bit more. It's just the way it is."

The Football Association has written to Monk to "seek his observations" following his comments.

The FA is yet to decide whether to take disciplinary action against the Swansea manager.