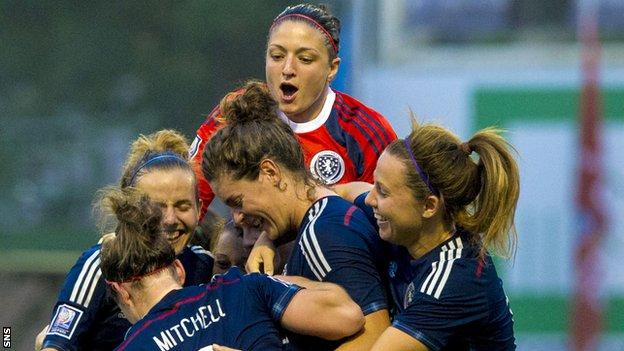 A year after starting the 2015 World Cup qualifying group stages, Scotland's fate was decided last month when we failed to beat Sweden away from home to give ourselves the chance of automatic qualification.

Instead, the play-offs await.

Only one spot is available for a final European team to reach Canada, and first up in the semi-final first leg is the toughest of all three opponents: Netherlands. The winner will face either Italy or Ukraine for that final place.

The Scotland squad has been together since Wednesday, and although for many it is the end of our respective clubs' seasons, the squad feels like it is on good form.

Head coach Anna Signeul is a huge believer in team activities and Thursday was our chance to get away from football for a few hours.

It's something that I feel has been fundamental in building the team's togetherness - and the karaoke was this camp's surprise, and one which certainly suited some players more than others.

Although some outsiders may question these activities, it's something that has been effective for the squad in giving the players downtime.

It has also helped maximise the time spent together to create an environment that gets the best out of us - which I feel as been demonstrated throughout this campaign.

This camp has again allowed for the selection of some newer recruits which has meant the average age continues to slip below my own years.

I have almost fallen within the "older" half of the group, which has had some training implications.

In the traditional "young v old" competition that takes place during the final training session of the week, I now put on a different colour of bib, along with my roommate Jane Ross, who is also making the difficult step.

However, the addition of the likes of Caroline Weir and Lizzie Arnot have most definitely been worthy call-ups and I feel give the team great attacking options with their youthful creativity.

Anyway, looking at our opponents, based on the last few times we've met, I guess the results have favoured us, but I don't feel it's a real reflection on much else.

These games have certainly not been on as big a stage and often the scoreline has been close.

The games have also been high-scoring, and I feel both sides have great attacking ability - and certainly we have done some work over the last few days on the threat that we expect Netherlands to possess going forward.

It gives the game a unique pressure, and even those who played two years ago against Spain in the Euro 2013 play-offs have never been involved in a World Cup campaign at this stage.

That's something that has been spoken about during the qualification rounds and even more so since the draw a few weeks back, and, as a squad, we now must look forward to Saturday's match.